This is one of the south Indian states and is positioned in the coastal area towards the south eastern part of the country. Because of its location in the merging area of the Deccan plateau and the coastal plains, the state has got varied physical features. Being ruled by some of the famous dynasties in the historical times, this south Indian state is said to have a rich cultural heritage. Historically known as the “Rice Bowl of India”, this state has got a number of places of visit that are of historical importance. Andhra Pradesh occupies fifth position in terms of area. The state is sprawled in an area of approximately 2, 76, 754 sq kms. Location of this state lies between 77Â° and 84Â° 40` North latitude and 12Â° 41` and 22Â° East longitude. This state shares boundary with Orissa and Madhya Pradesh in north, in east with Bay of Bengal, Karnataka and Tamil Nadu to its south and in west, Maharashtra flanks the border. For smooth administration of this state, it has been divided into twenty three districts. There are three prominent regions as per geographical aspects, and these are Telangana, Kosta or Coastal Andhra and Rayalseema. To the west of Deccan Plateau Ghats, Telangana region lies. From Western Ghats, Godavari River and Krishna River originates and flow eastwards towards Telangana region and finally pours into Bay of Bengal. Amidst ranges of Eastern Ghats, Coastal Andhra occupies coastal plain region. This region runs along the length of Andhra Pradesh State and Bay of Bengal. On its south east, Rayalseema region is located close to the Deccan Plateau, and it lies within Pennar River Basin. The low lying Erramala hills, separates the state from Telangana region and Eastern Ghats separates it from Coastal Andhra. 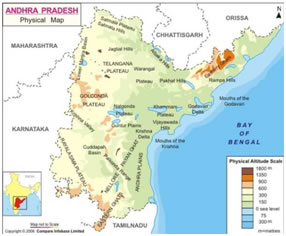 Andhra Pradesh also boasts of the second longest coastline in India, which stretches upto 970 km. The long coastline has been unofficially divided into three geographic regions, known by the names of Kosta, Telangana and Rayalaseema respectively. Andhra Pradesh possesses many hills that run intermittently, separating the state into western and eastern (coastal) Andhra. The hill ranges like Simhachalam, Annavaram, Srisailam and Tirumalai-Tirupati, have become the integral geographical part of state’s life and history. Godavari and Krishna are the two major rivers that pass through this state. The basins of these rivers and their tributaries cover almost 75% of the state territory. Apart from these major rivers, there are around 17 other rivers and streams flowing through Andhra Pradesh. The state also observes substantial topographical variations, due to thick forest in the north east, beaches next to the Bay of Bengal, plane paddy lands in the coastal plains and the barren boulder-spotted region near Hyderabad

The state includes the eastern part of Deccan plateau as well as a considerable part of the Eastern Ghats. The entire state is divided into the following 3 distinct regions:

The northern side of the Deccan plateau is marked as the Telangana region, while the southern side is known as the Rayalaseema region. River Krishna separates these two regions from each other. The other rivers flowing through the state are Godavari and Penner. The coastal area of the state is mostly formed by the deltas of these rivers of Andhra Pradesh. Depending on their geographical location, the climate of the respective regions is featured with considerable variations. The summer season in this state, generally, stretches from the month of March to June. The coastal areas have got comparatively high temperature than the other parts of the state. The average temperature ranges from 20° C to 41° C. The summer is followed by the monsoon season, which starts during July and continues till September, when the heavy rainfall is received by the state from the south west monsoon. The north east monsoon contributes to around one third of the annual rainfall. This monsoon, usually, occurs during the months of October and November. Featured by tropical rains, this season plays a vital role in the identification of the nature of the state’s climatic conditions. The period in between November and February is said to be the winter season in Andhra Pradesh. The winter temperature is not too cold and ranges in between 12° C to 30° C.

Geologically  the  state  consists  of  igneous,metamorphic  &  sedimentary formations.  Peninsular Geneissic  Complex  consisting  of  Archaean  Group  covered  by  complex  group  of  Gneisses  and Schists.  The  Precambrian  Sedimentary  formation  of  the  Cuddapah  Super  Group,  Pakhal  Super Group  and  Kumool  Group  are  found  in  Kurnool,  Cuddapah, Ananthapur,  Chittoor,  Nalgonda, Mahabubnagar, Guntur, Krishna and Khammam Districts. The Bhima’s are found in the western part of Rangareddy District, the Gondwana Super Group in  Khammam,  Warangal,  Karimnagar  and Adilabad  Districts.  The  Deccan  Traps  are  found  in Rangareddy,  Nizamabad,  Medak  and  Adilabad  Districts.  Outcrops  of  Tertiary  formations  are found in East and West Godavari and Vishakapatnam Districts and the Quaternary sediments as thick blankets of alluvium are found in the river valleys, deltas and along the East Coast.

The  State  of  Andhra  Pradesh  abounds  in  a  variety  of  mineral  deposits  with  about  48  minerals, some of which are unique in nature like that of Barytes, Chrysotile Asbestos and Green Quartz. Most  of  the  mineral  deposits  are  related  to  the  nature  and  composition  of  the  country  rocks  in which  they  occur  and  also  the  geological  structure.The  Dharwar  Schists  and  the  associated Gnesisses  and  Granite  contain  a  large  variety  of  metallic  ores  such  as Gold,  Manganese, Chromite,  Copper,  Iron  Ore,  Bauxite  and  Wolframite.  Deposits  of  non-metallic  minerals  like Diamond,  Apatite,  Corundum,Feldspar,  Garnet,  Quartz,  Green  Quartz,  Amethyst,  Graphite, Kyanite  and  Mica  are  also  found  in  them.  These  Archaean  Group

of  rocks  is  a  storehouse  for different   varieties   of   Gneisses,   Charnockites,   Granites,   Anorthosites,   Dolerite   Gabbro, Khondalites,  Quartzites,Granulites,  Migmatites,  Lyptenites,  Syenites  and  Crystalline  Limestone which are useful in building, cutting and polishing industry. The  Copper  and  Lead  ores.  Barytes,  Clays,  Red-ochres,  Asbestos,  Haematite,Steatite  and Diamond  are  the  important  mineral  deposits  found  within  the  Cuddapah,Kurnool  and  Pakhal Groups.  Some  of  the  rocks  within  this  group,  particularly  the Quartzites,  Limestone,  Marble, Dolomite, Slates and Sand Stones are good building stone and are found in significant quantities. The  Gondwana  group  contains  vast  deposits  of  Coal  and  Refractory  Clays  like  Fire  Clay  and Ball  Clay.  The  Pleistocene  formations  occurring  both  on-shore  and  off-shore  contain  oil  and natural gas. The  recent  formations  comprising  of  Alluvium.  Sand  and  Soils  yield  good  Brick Clays  and  Sand  for  building  and  other  purpose.  The  coastal  heavy  sands  contain  rich  llmenite, Rutile, Monazite, Zircon, Gamet and other minerals. Andhra  Pradesh  is  gifted  with  a  vast  and  varied  decorative/dimensional  stones  viz,  Granites,  Limestone Slabs, Marble, Slate, Phyllite, Quartzite etc. Globally known for exclusive and unique Chimakurthy  Black  Galaxy  Granite  and  other  varieties  like  Warangal  Jet  Black,  Khammam Black,  Srikakulam  Blue  and  White,  Karimnagar  Tan  Brown,  Ananthapur  Chilly  Red.  Chittor Kuppam Green etc. The Granite varieties of Andhra Pradesh confim to the highest international standards  and  provide  excellent  uniformity,  consistency  and  have  been  used  in  several  well known buildings all over the world. Various  colours  of  Limestone  Slabs  from  Tandur,  (Rangareddy  District),Betamcharla  (Kurnool District), Tadipatri    (Ananthapur    District),    Macherla    (Guntur District),    Mudimanikyam (Nalgonda  District)  are  well  known  for  flooring  and  paneling  purposes  within  the  country  and are also being exported to many countries. Slate and Phyllites in various shades of colours from Prakasam, Guntur and Nalgonda Districts are used as decorative stones and are being exported to various countries.

Andhra  Pradesh  is  exposed  to  cyclones,  storm  surges,  floods  and  droughts.  A  moderate  to severe  intensity  cyclone  can  be  expected  to  make  landfall  every  two  to  three  years.  About  44 percent  of  the  state  is  vulnerable  to  tropical  storms  and  related  hazards.  In  India,  the  cyclones develop  in  the  pre-monsoon  (April  to  May)  and  post-monsoon  seasons  (October  to  December), but most of them tend to form in the month of November. Cyclones on the east coast originate in the Bay of Bengal, the Andaman Sea or the South China Sea,  and  usually  reach  the  coastline  of  Tamil  Nadu,  Andhra  Pradesh,  Odisha  and  West  Bengal, which  are  the  most  vulnerable  to  these  types  of  hazards.  Two  of  the  deadliest  cyclones  of  this century,  with  fatalities  of  about  10,000  people  in  each  case,  took  place  in  Odisha  and  Andhra Pradesh during October 1971 and November 1977 respectively. The super cyclone of Odisha in 1999 caused large scale damage to life and property. Along the Andhra coast, the section between Nizampatnam and Machilipatnam is the most prone to storm surges. Vulnerability to storm surges is not uniform along Indian coasts. The following segments of the east coast of India are most vulnerable to high surges

The states bordering the Arabian Sea on the west coast are not completely safe either, as Kerala, Gujarat -and  to  a  lesser  extent  Maharashtra -are  also  prone  to  cyclones.  With  a  frequency  of four  cyclones  per  year,  one  of  which  usually  becomes  severe,  the  Bay  of  Bengal  accounts  for seven  percent  of  the  annual  tropical  cyclone  activity  worldwide.  Despite  this  relatively  low percentage, the level of human and property loss that cyclones cause around the Bay is very high. Once  the  cyclones  enter  the  mainland,  they  give  way  to  heavy  rains  which  often  translate  into floods,  as  it  was  the  case  with  the  damaging  cyclone-induced  floods  in  the  Godavari  delta,  in August of 1986. Many  drought  prone  areas  adjacent  to  coastal  districts  in  eastern  maritime  states  are  thus vulnerable to flash floods originated by the torrential rains induced by the cyclonic depression. In addition  to  cyclones  and  its  related  hazards,  monsoon  depressions  over  the  north  and  central areas  of  the  Bay  of  Bengal  move  until  reaching  north  and  central  India,  including  portions  of Andhra  Pradesh,  bringing  heavy  to  very  heavy  rains  and  causing  floods  in  the  inland  rivers between  June  and  September.  In  Andhra  traditionally,  the  flood  problem  had  been  confined  to the flooding of smaller rivers. But the drainage problem in the coastal delta zones has worsened, multiplying the destructive potential of cyclones and increasing flood hazards. A critical factor is maintenance of irrigation systems. On several occasions, deaths have been caused by breaches in tanks and canals as well as over-flooding caused by silting and growth of weeds.