Bavikonda Buddhist Complex lies about 16 km from Visakhapatnam, in the Indian state of Andhra Pradesh, on a hill about 130 metres above mean sea level. The term Bavikonda in Telugu means a hill of wells. As per its name, Bavikonda is a hill which has wells for the collection of rainwater. Bavikonda Monastery dates back to the 3rd century BCE.  A large Buddhist complex was excavated at this site.

Erravaram Caves are located on the left bank of Yeleru river, at a distance of 45 km from Rajahmundry on Vishakhapatnam route. The caves are located on Dhanla–dibba hillock. The excavations revealed historic remains dated back to 100 A.D.. This site flourished from 1st century B.C. to 2nd century A.D.

Jwalapuram (meaning “City of fire” in Sanskrit) is an archaeological site in the Kurnool district of Andhra Pradesh, southern India, which shows hominid habitation before and after the Toba event according to the Toba catastrophe theory. It is unclear what species of humans settled Jwalapuram as no fossil remains have yet been found. 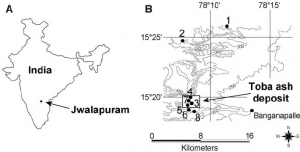 Jwalapuram is of particular importance in understanding the emergence of microlithic technology in South Asia and the role of environmental change on lithic technological change. At Jwalapuram Locality 9, five stratigraphic units provide a record of technological change throughout time. Microblade technology dominates lithic assemblages from Stratum E to the top deposit. There are many different definitions for “microblade” and Clarkson et al. define microblade with a 40mm maximum length in the direction of striking and a length:width ratio greater than 2:1; they also include that the dorsal surface has nearly no cortex (less than 20 percent) and at least on dorsal ridge in the direction of striking as well as nearly parallel lateral margins. Using this definition of microblade, Clarkson et al. track the changing density of microblade technology throughout the strata. The changes in microlithic technology is speculated to have been caused by climate change, which made the area more arid and therefore groups of people had to become more mobile, causing changes in their technological tool kits.

Bojjannakonda and Lingalakonda are two Buddhist rock-cut caves on adjacent hillocks, situated near a village called Sankaram, which is a few kilometres away from Anakapalle, Vishakhapatnam in the Indian state of Andhra Pradesh. The sites are believed to date between 4th and 9th Century A.D, when the 3 phases of Buddhism (Hinayana, Mahayana, and Vajrayana) flourished at Sankaram (Sangharam as it was called then) .

Pavurallakonda or Pavurallabodu is the local name of a hill, popularly known as Narasimhaswamy Konda, near Bheemunipatnam about 25 km towards north of Visakhapatnam, in the Indian state of Andhra Pradesh. It is located at a height of about 150 meters above mean sea level.  Pavurallakonda consists of a ruined hill-top Buddhist monastic complex probably witnessed human habitation from 3rd Century BCE to 2nd century CE. It is one of the Largest Buddhist Monasteries of North Coastal Andhra Region. Hinayana Buddhism may have flourished at this hill-top site.

Initial Excavation of this site yielded many relics. Two Brahmi label inscriptions, foundations of Viharas, circular chaityas, votive stupas, halls etc. are located among the ruins. Coins, polished ware, beads etc. were recovered from the site by the state archaeology Department of Andhra Pradesh. Nearly Sixteen rock-cut cisterns are carved on the hill for the storage of rain water. Excavations and Restoration Program are under progress at Pavurallakonda.

In 500 BCE, Dharanikota was known as Dhanyakatakam.This is the capital of a great kingdom ruled by Satavahanas. Archaeological excavations at Dharanikota revealed viharas in Dharanikota and nearby areas. It is the site of ancient Dhanyakataka, which was the capital of the Satavahana dynasty that ruled in the Deccan around the 1st to 3rd centuries CE. It was also the capital of the Kota Vamsa, which ruled during the medieval period until the mid 12th century. The Krishna River Valley is an important rice producing area. It was also an important centre of trade with other parts of India and foreign countries. The place is also famous for the great stupa; a very large Kalachakra ceremony was conducted there in January, 2006. Xuanzang visited Amaravathi village, Guntur district and wrote a glorious account of the place and the viharas that existed then.

Salihundam, a historically important Buddhist monument and a major tourist attraction is a village lying on top of the hill on the south bank of the Vamsadhara River. It is about 9 miles from Srikakulam.  There are numerous Buddhist stupas, discovered in 1919 by Gidugu Venkata Rama Murthy. Four stupas, relic caskets, and architectural shrines were discovered during digging performed by state authorities, as well as sculptures of Buddhist dieties Mareechi and Tara. All of the remnants were built between the 2nd century and 12th century, reflecting the different times of Buddhism: Mahayana, Theravada and Vajrayana.  Salihundam is one of the main Buddhist excavation sites, due to its status as showing evidence that Buddhism thrived in the local area during the 2nd and 3rd centuries.

Thotlakonda Buddhist Complex  is situated on a hill near Bheemunipatnam about 15 kilometres from Visakhapatnam in Andhra Pradesh, India. The hill is about 128 metres above sea level and overlooks the sea. The Telugu name Toṭlakoṇḍa derived from the presence of a number of rock-cut cisterns hewn into the bedrock of the hillock.  Thotlakonda was well within the influence of ancient Kalinga, which was an important source of dissemination of Buddhism to Sri Lanka and various parts of Southeast Asia. It provides an insight into the process of transoceanic diffusion of Indic culture, especially Buddhism.