In 1753, a decree of Asif ad-Dawlah Mir Ali Salabat Jang, Subedar of Deccan conceded to General Bussy the paragons of Chicacole, Ellore, Rajahmundry etc. with an annual revenue Rs.200,000 for the maintenance of the French troops in the Subah in recognition of the help of these Circars amounted up to 1 million Rupees per year. Bussy helped Salabat Jang to be the Subedar of Deccan. The agreement made between the French and Salabat Jang in Aurangabad bears the signature of Said Loukshur, Minister of Salabat Jang. Yanam acquired considerable importance during the occupation of the Northern Circars by the French. Another important event in the history was the war between the French and the English fought at Chandurthi (now is in Gollaprolu mandal) in East Godavari district) in 1758 in which the French were defeated by the combined armies of British and Maharaja Ananda Gajapathi Raju- 2 of Vizianagram. Salabat Jang made a treaty with British and gave the Northern Circars under a firman to the English. Later, Nizam rebelled against the English. A second treaty was the result of war and Northern Circars remained permanently under the control of the British. After 1760 the French lost hold in South India, especially on Northern Circars. In 1765, Lord Robert Clive, the then existing Chief and Council at Vizagapatam obtained from the Mughal emperor Shah Alam a grant of the five Circars. In 1792, the British got the complete supremacy, when they defeated Maharaja Vijaya Rama Gajapathi Raju of Vizianagaram.

Then Northern Circars became part of the British Madras Presidency. Eventually that region emerged as 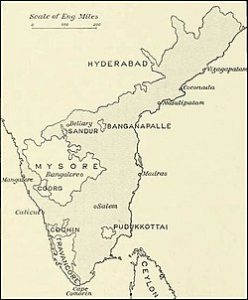 Coastal Andhra region. Later, the Nizam had ceded 5 territories (Datta Madalâlu) to British which eventually emerged as Rayalaseema region. The Nizams retained control of the interior provinces as the Princely state of Hyderabad, acknowledging British rule in return for local autonomy The provinces were at the time governed in a feudal manner, with Zamindars in areas such as Kulla and other parts of the Godavari acting as lords under the Nizam. The feudal or zamindari system was removed after independence.

India became independent from the United Kingdom in 1947. The Muslim Nizam of Hyderabad wanted to retain his independence from India, he was forced accede his state to India in 1948 as the Hyderabad State. When India became independent, the Telugu-speaking people (although Urdu is spoken in some parts of Hyderabad and in few other districts of Telangana) were distributed in about 22 districts, 9 of them in the Telangana region of Nizam’s Dominions (Hyderabad State) and 12 in the Madras Presidency and one in French controlled Yanam. Andhra State was the first state in India that has been formed on a purely linguistic basis by carving it out from Madras Province in 1953. Andhra State was later merged with Telugu speaking area of Hyderabad (Telangana) to create Andhra Pradesh state in 1956. In 1954, Yanam was liberated and it was merged with Puducherry in 1963.

However, in 1953, Telugu speakers of Madras Presidency wanted Madras as the capital of Andhra state including the famous slogan “Madras Manade” (Madras is ours) before Tirupati was included in Andhra Pradesh. Madras at that time was an indivisible mixture of Tamil and Telugu cultures. It was difficult to determine who should possess it. Panagal Raja, Chief Minister of the Madras Presidency, in the early 1920s said that the Cooum River should be kept as a boundary, giving the northern portion to the Andhras and the southern portion to the Tamils. In 1928, Sir C. Sankaran Nair sent a report to the Central Council discussing why Madras does not belong to the Tamils. But finally, it was decided that Madras would remain in the Tamil region. According to the JPC report, (Jawahar Lal Nehru, Bhogaraju Pattabhi Sitaramayya, C. Rajagopalachari) Telugu people should leave Madras for Tamils if they want a new state.

In an effort to protect the interests of the Telugu people of Madras state, Amarajeevi Potti Sriramulu attempted to force the Madras Presidency government to listen to public demands for the separation of Telugu speaking districts (Rayalaseema and Coastal Andhra) from Madras Presidency to form the Andhra state. He went on a lengthy fast, and only stopped when Prime Minister Jawaharlal Nehru promised to form Andhra state. However, there was no movement on the issue for a long time. He started fasting again for attaining statehood for Andhra in Maharshi Bulusu Sambamurthy’s house in Madras on 19 October 1952. It started off without fanfare but steadily caught people’s imagination despite the disavowal of the fast by the Andhra Congress committee. The government of the day however did not make a clear statement about the formation of a new state despite several strikes and demonstrations by Telugu people. On the midnight of 15 December (i.e. early 16 December 1952), Potti Sriramulu died and laid down his life trying to achieve his objective. In his death procession, people shouted slogans praising his sacrifice. When the procession reached Mount Road, thousands of people joined and raised slogans hailing Sriramulu. Later, they went into a frenzy and resorted to destruction of public property. The news spread like wildfire and created an uproar among the people in far off places like Vizianagaram, Visakhapatnam, Vijayawada, Eluru, Guntur, Tenali, Ongole and Nellore. Seven people were killed in police firing in Anakapalle and Vijayawada. The popular agitation continued for three to four days disrupting normal life in Madras and Andhra regions. On 19 December 1952, the Prime Minister of the country Jawaharlal Nehru made an announcement about formation of a separate state for Telugu speaking people of Madras Presidency.

Merger of Telangana and Andhra

In December 1953, the States Reorganization Commission was appointed to prepare for the creation of states on linguistic lines. The commission, due to public demand, recommended disintegration of Hyderabad state and to merge Marathi speaking region with Bombay state and Kannada speaking region with Mysore state. The States Reorganisation Commission (SRC) was not in favour of an immediate merger of Telugu speaking Telangana region of Hyderabad state with Andhra state, despite their common language. Para 378 of the SRC report said “One of the principal causes of opposition of Vishalandhra also seems to be the apprehension felt by the educationally backward people of Telangana that they may be swamped and exploited by the more advanced people of the coastal areas.” The Chief Minister of Hyderabad State, Burgula Ramakrishna Rao, expressed his view that a majority of Telangana people were against the merger. He supported the Congress party’s central leadership decision to merge Telangana and Andhra despite opposition in Telangana. Andhra state assembly passed a resolution on 25 November 1955 to provide safeguards to Telangana. The resolution said, “Assembly would further like to assure the people in Telangana that the development of that area would be deemed to be special charge, and that certain priorities and special protection will be given for the improvement of that area, such as reservation in services and educational institutions on the basis of population and irrigational development.”Telangana leaders did not believe the safeguards would work. With lobbying from Andhra Congress leaders and with pressure from the Central leadership of Congress party, an agreement was reached between Telangana leaders and Andhra leaders on 20 February 1956 to merge Telangana and Andhra with promises to safeguard Telangana’s interests. Andhra state and Telangana was merged to form Andhra Pradesh state on 1 November 1956 after providing safeguards to Telangana in the form of Gentlemen’s agreement.

There have several movements to invalidate the merger of Telangana and Andhra, major ones occurring in 1969, 1972 and 2000s onwards. The Telangana movement gained momentum over decades becoming a widespread political demand of creating a new state from the Telangana region of Andhra Pradesh. Proponents of a separate Telangana state feel that the agreements, plans, and assurances from the legislature and Lok Sabha over the last fifty years have not been honoured, and as a consequence Telangana has remained neglected, exploited, and backward. They allege that the experiment of Andhra Pradesh to remain as one state has proven to be a futile exercise and that separation is the best solution. On 9 December 2009, Government of India announced process of formation of Telangana state. Due to objections raised in Coastal Andhra and Rayalaseema regions immediately after the announcement, and due to the agitation in those regions for 14 days, the decision to form to new state was put on hold on 23 December 2009. The movement continues in Hyderabad and other districts of Telangana