Andhra Pradesh in the south has patronized itself in a host of arts and crafts that not only attract millions but earn the artisans a decent livelihood. The various forms of arts and crafts are aristocratic to this state and are not found anywhere else in India.

If any of the several head turning art and crafts of Andhra Pradesh is same popular with the adults and the children, it is the Kondapalli dolls. The Kondapalli dolls of Andhra Pradesh are light weighted wooden dolls, which come from a small village called Kondapalli in the vicinity of Vijayawada. The dolls are so adorable yet warm and realistic. The faces of the figures are extremely expressive and the subjects are taken from our life. Soft Poniki wood is used to create these dolls and toys, which depicts everyday scenes, figures of deities, animals, birds and mythological characters. The Kondapalli dolls are mainly based on village life, its incidents and characters. The popularity of this fantastic craft work has reached the foreign shores also, the main reason being its flexibility. 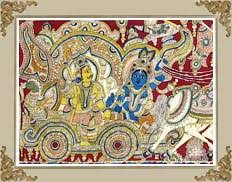 Out of the many beautiful forms of handicrafts, the Kalamkari in Andhra Pradesh has always been favorite with the art and craft lovers. The Kalamkari craft of Andhra Pradesh involves the art of printing and painting of fabrics. This is a rare kind of art, which uses a Kalam or quill, from which it has earned its name and also vegetable dyes. It is exclusively found in the Machilipatnam and Srikalahasti areas of the state. However the areas have distinct styles of their own. While artists in Machilipatnam use designs carved in wooden blocks for printing, the Srikalahasti style uses the wax process to fill in the colors after drawing the outlines with the quill.

Butta Bommalu is a popular dance form in the state of Andhra Pradesh. It is the foster child of the West and East Godavari districts of Andhra Pradesh. The name Butta Bommalu literally means puppets made in the form of basket. Butta Bommalu or the basket puppets are made out of thin bamboo strips. These strips are woven into the shape of long spherical basket figures. The performer of Butta Bommalu gets into the huge, hollow figure, the puppet. The performance starts with the dancer moving to the rhythm of four dappus, a musical instrument. It is generally performed in the open space. The puppet-figure is about eight feet tall and it has a radius of three feet. The figure is hollow at the bottom it is from there that the performer gets into the puppet. The puppet is tied down to the performer’s waist and shoulders.

Andhra Pradesh occupies an eminent place in the classical dance forms of India. Apart from the classical dances, it is also known for its tribal dances. Some of the popular tribal folk dances of Andhra Pradesh are Bathakamma, Gobbi, Mathuri, Dhamal, Dandaria, Dappu, Vadhyam etc. Lambadi dance is a tribal dance of Andhra Pradesh. Lambadi is related to the Lambadi tribe, who lead a semi-nomadic life in Andhra Pradesh. The Lambadi tribe lives all over the state. They are popularly known as Banjaras or Sugalis. The dancers perform this dance to rejoice an abundant harvest or a good sowing season.

The complicated and the very beautiful Bidriware was developed during the gothic times. Bidriware was originated in the 14th century C.E., during the reign of the Bahamani Sultans. The term ‘Bidriware’ arises from the township of Bidar, which is still the head centre for the manufacture of the antique metal work. Bidriware is an important export handicraft of India and is seen as a symbol of wealth because of its striking inlay artwork. The origin of Bidriware is usually ascribed to the Bahamani sultans who ruled Bidar between the 13th and the 15th centuries. The Sultan invited Abdullah bin Kaiser, a craftsman from Iran to work on embellishing the royal palaces and courts; which he did by joining hands with local craftsmen and thus gave birth to Bidriware. Since then, the local Muslim and Lingayat sects have been handed down the art in order to succeed generations.

Adding to the list of the envious collection of fascinating art and craft forms, the Nirmal Paintings of Andhra Pradesh holds a significant position in the art and handicraft sector of the state. The exquisite traditional art form of Nirmal Paintings has earned its name from the Nirmal town in Adilabad district, where it is mostly seen. The community of craftsmen who are engaged with the traditional art form of Nirmal paintings are known as Nakkash. They usually depict the scenes from Hindu epics of Ramayana, Mahabharata and other historical and mythological stories. This form of art received great patronage from the Mughal rulers, who were captivated by its beauty. Later on, Lady Hydri promoted Nirmal paintings in Hyderabad by bringing in experts craftsmen to the city.

The leader of the group controls the troupe and is known as Pennuddi or Kolanna Pantulu or Garuva. A couple of players is called Uddi, among the two one is called Rama and the next one is known as Lakshmana. Kolattam begins with the formation of a big circle consisting of all the members of the troupe, which later splits into two, one within the other. The leader of the troupe of Kolattam is accompanied by the Mridangam, flute, harmonium and cymbal players, who stand in the middle of the internal circle. Each performer holds up two sticks one in each hand that are decorated with colored strings or bells at its end.