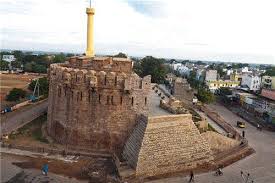 The Ketavaram rock paintings from the Paleolithic era and are (18 kilometres from Kurnool). Also the Jurreru Valley, Katavani Kunta and Yaganti in Kurnool District have some important rock art and paintings in the vicinity, may be dated from 35,000 to 40,000 years ago.

The Belum Caves is the largest and longest cave system open to the public on the Indian subcontinent, known for its speleothems, such as stalactite and stalagmite formations. The Belum Caves have long passages, galleries, spacious caverns with fresh water and siphons. This natural underground cave system was formed over the course of tens of thousands of years by the constant flow of underground water.

The early village settlements of Neolithic culture in Kurnool district

Archaeological research in Kurnool district began in the later half of 19th century a number of attempts have been made by various scholars and discovered many stone sites in different areas. Later on several individual scholars and a few of ASI brought to light several Proto historic, Neolithic, Chalcolithic and Meghalithic sites. The present study has been made on the Early village settlements of Neolithic culture in Kurnool district, Andhra Pradesh. This study reveals that Neolithic material culture represented from these sites include pottery, tools and objects of pecked and ground stone industry, blade artifacts, animal remains, plant remaining along with other cultural material for the reconstruction of socio- economic and other cultural features being designated as the first village communities in the area concerned indicating the potentiality of the present region in view of first settled way of life in the form of village and other cultural process that had occurred within the Neolithic culture need attention for our understanding in the area drained by Kunderu and its numerous streams in the southern part of the Kurnool district.

Some other Neolithic cultures of Andhra Pradesh

The stone tools of the Neolithic people consisted of ground stone tools like axes, adzes, wedges, chisels, microliths and stone blades. At Palavoy a rich bone tool assemblage comprising axes, blades and points has been found. In the later stages of the culture copper and bronze tools also came to be used.

The pottery was initially only handmade, of poor quality and drab grey colour, and consisted of jars, spouted vessels and bowls of various sizes, sometimes decorated with incised designs. In later stages wheel made, sturdy pottery, occasionally decorated with painted motifs, also came into use. An important new ceramic was the black-and-red ware.

The Neolithic people lived in circular or rectangular wattle-and-daub huts with floors having stone paving. Large stones were placed around the huts on the outside to protect them from winds. There is evidence of a burnt hut at the site of Sanganakallu which indicate that the huts had a thatched roof.

In the Andhra Pradesh Kadambapur, Nagarjunkonda, Gallapalli and Amravati can be identified as the major megalithic sites.

The megalithic sites of South India yield ample evidence regarding specialized craft activities. Different kinds of pottery have been unearthed, including the diagnostic Black and Red Ware. Some decorative shapes are distinctive, like the lidded pot moulded in the form of some animal or bird. The graves are replete with beads of various kinds. Copper and bone artefacts and a sprinkling of gold and silver objects occur at most of the sites. But at the majority of the sites iron objects outnumber the objects made of other metals. The widespread use of iron in everyday life is clearly attested by the discovery of iron utensils, weapons, carpentry tools and agricultural implements.

Few megalithic graves contain bones of children and there is a very high percentage of adult male burials. The same burial area continued to be used for centuries. The south Indian megaliths overlapped with the early historical layers. It seems that the graves were not used more than once or twice in a generation. They probably represent the site of burial for a small elite group within a ranked society.