Besides utilizing state water resources for fisheries development, fisheries sector is also providing low cost food rich in protein & employment to rural weaker sections. In Rajasthan a good number of water bodies are available covering about 4.23 lakh hectare water spread area. In addition to it, about 70 rivers and canals exist in the State covering about 30,000 hectare along with about 80,000 hectare water logged area and water resources of Rajasthan stands on 11th position in the country. As per the study conducted by the Central Institute of Fisheries Education, Mumbai (2010) the fish production potential of Rajasthan is more than 80,000 metric tonnes annually while production achieved in the year 2015-16 is only 42,461 metric tonnes in the State. 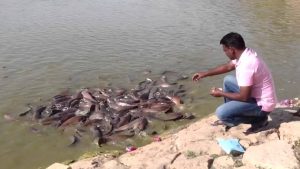 The Department has started implementation of ambitious scheme on ‘livelihood model’, which is a ‘zero revenue’ model, for the upliftment of tribal fishermen in three reservoirs namely Jaisamand (Udaipur), Mahi Bajaj Sagar (Banswara) and Kadana Backwater (Dungarpur). A total of about 3,700 fishermen of 37 fishermen cooperative societies are being benefitted under this model and the earning of tribal fishermen working on regular basis has increased manifold. The work for the modernization of government fish farms namely Soorsagar (Kota), Siliseth (Alwar), Lakhuwali (Hanumangarh), Sagrod (Banswara) and Gilva (Tonk) is undertaken out of which fish farm of Sagrod (Banswara) and Gilva (Tonk) have been completed and rest of the farm work is in progress. Renovation work of fish farm Chandlai (Tonk) is in progress, which will cost `275.00 lakh. This will lead to self-sufficiency in fish seed production.

Under National Mission for Protein Supplement scheme, a cage culture project has been sanctioned by Government of India at a cost of `3.44 crore for the dissemination and demonstration of modern fisheries techniques at Mahi Bajaj Sagar (Banswara) and 56 cages have already been installed and seed stocking in cages and rearing work is also started in some cages. Apart from this, National Fisheries Development Board, Hyderabad, GoI has sanctioned a project of 2.23 crore towards raising of fish seed in 162 cages in 14 reservoirs of Rajasthan to augment the fish production of the State. Under Aquaculture through integrated approach component of National Mission for Protein Supplement (NMPS), the fish seed stocking in Jaisamnd and Kadana Back Water Project at cost of 2.50 crore is approved for three years. 38 lakh fish fingerling seed have been stocked in Jaisamand (Udaipur) and Kadana Back Water (Durgapur) during the year 2015-16.

A vision to achieve the fish production of 50,000 MT annually by the end of 12th five year plan have been prepared and accordingly efforts are being made with a focus on reservoir fisheries development through stocking of fish seed of fingerling instead of small fry seed for better survival and innovative fisheries  culture tools such as cage culture with the help of the various centrally sponsored/sector schemes, such as Fish Farmers Development Agencies of Inland Fisheries and Aquaculture Development, National Scheme for Welfare of Fishermen, Rastriya Krishi Vikas Yojana, National Mission for Protein Supplements and National Fisheries Development Board.