ð Music is an essential part of the dance that’s why the Chari Dancers are accompanied by the group of skillful traditional singers who sings as the women start the dance.

ð  Drum Dance, famous in Rajasthan India is a professional dance-form of Jhalore region of Rajasthan, where only the men participants can perform. In this dance, five men beat huge drums that are tied around their necks.

ð  There is no boundation for the performance of drum dance but it is generally performed in big occasions like festivals, marriage etc. 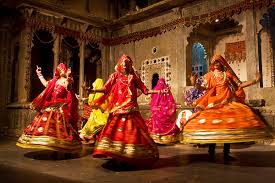 Kathputli – The Puppet Dance of Rajasthan

ð  Terah Taali is one of the folk dances of the princely state, Rajasthan. This folk dance is performed by the Kamada tribes who are traditional snake charmers. Besides this it is also performed by the tribes of Mirasi, Bhand, Dholi, Bhat and Nat. It is also practiced by Pokhran and Deedwana, to honour their folk hero, Baba Ramdeo, it consists of women sitting on the floor before his image.

ð  Terah Taali Dance is generally performed by well skilled artists. Thirteen manjeeras ( little brass disc) are tied to various parts of their body, which they strike with the ones they hold in their hand. This creates a rhythm on which the dancers move.

Two types of music that are especially famous in Rajasthan are described below:

Maand: Originated as court music, the maand is a distinct raga that was developed in Marwar. It is very sophisticated and involves complex inflexion of voices sung in deep bass but with time it permeated to the folk forms we know today and when ballads of the chivalrous rulers and local folk heroes are sung using maand raga, they have a unique haunting quality that echoes in the desert. Its popularity is evident from the fact that an entire festival in Jodhpur is dedicated to it exclusively.

Pabuji ka Phad: Pabuji Ramdeo was a folk hero of the 14th century in the Bhopa region whose legends have become timeless in the form of ballads that are sung against a painted scroll known as the ‘Phad’ paintings where scenes from his story are portrayed in comic-strip fashion. Its performances were always held at night, when the villagers gathered for these performances. The Bhopa minstrel would sing the ballad and give the music using ravanhatha while his wife used to hold an oil lantern illuminate just the particular portion of the scroll that matched with the episode of the story he was singing about.