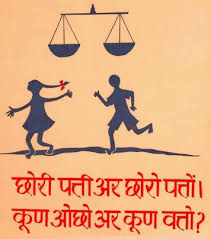 Rajasthan is principally a Hindi-speaking region in its various dialects. Rajasthani comprises of five primary dialects – Marwari, Mewari, Dhundhari, Mewati and Harauti along with several other forms.

These dialects have been derived as a distortion of the linguistic and orthographical peculiarities of the language with time. Rajasthani literature faced its worst period during the British Raj period. However, it is flourishing these days as hundreds of poets and writers have emerged who use the vernacular form of Rajasthani language as their medium. Rajasthan’s folk literature is rich and varied in its nature and exists in forms of the folk songs, so famous folklores, witty sayings and proverbs, riddles and much-treasured folk-plays known as ‘khayals’.

The most common language of Rajasthan is Marwari, spoken mainly in and around Jodhpur district. The mixed dialects of Marwari are also spoken in Barmer, Jalore, Pali, part of Nagaur district. In the east, it influences the dialects of Ajmer, Udaipur, Bhilwara, Chittorgarh, to the south in Sirohi district and in the west, it affects the dialects of Jaisalmer district. Bikaner, Churu, Sikar and Jhunjhunu districts in the north are also influenced by Marwari while in the northwest, it is spoken with Punjabi influence in the Ganganagar district.

Mewari is actually the eastern form of Marwari used frequently to the southeast of the former princely state of Mewar, which comprised of Udaipur, Bhilwara and Chittorgarh districts, and its neighborhood. The dialect used in the western parts of Barmer, Jaisalmer, Thar and Parkar areas of the former Sind is called Thali in the north and Dhatak in the west. In Bikaner it is called Bikaneri while in the northeastern part of Churu, it is known as Bagri.

Jaipuri or Dhundhari, earns a second place in terms of use and covers the districts of Jaipur, Tonk, Kota, Bundi, parts of Kishangarh, Ajmer and Jhalawar. Mewati is a dialect of Jaipuri to the northeast, which assumes the form of Braja Bhasha in Bharatpur. Mewati is actually the language of the former Mewat, the abode of the Meos. Dang is a further sub-dialect of Braja Bhasa in Sawai Madhopur and Karauli and that of Bundeli and Malvi in Jhalawar and the southern parts of Kota. Kishangarhi is spoken in Kishangarh and Ajmeri in Ajmer. The dialect spoken in Bundi and Kota is Harauti, which is also spoken in Jhalwar and Tonk districts.

Malvi of the former Malwa covers parts of the Jhalawar and Kota districts. The Bundeli of Narsinghpur and central Hoshangabad, the Marathi of Berar and the Nemadi dialect of Rajasthani is spoken in north Nimach and Bhansawar. The Bhils communicate in Bhili, which is similar to Dungarpur’s and Banswara’s Bagria form of Rajasthani with the exception of slight variation in the pronunciation. However, the language structure for both of them is the same.

The development of Rajasthani literature from the bardic language, ‘Dingal’ and virkavya (heroic poetry) took form in the context of the medieval social and political establishments and shapings in Rajasthan. For centuries, Caran bards, court poets and chroniclers have added incessantly to the tradition of Dingal virkavya. In contemporary times even, medieval virkavya as well as still-surviving oral traditions continue to inspire and invigorate Rajasthani prose and poetry. The maturation and growth of written and oral Rajasthani narrative literature can be exemplified by a revision of the medieval and modern tradition of the adventures of Pabuji Dhandhal Rathaur, a 14th century Rajput gallant. Epic poems and eulogistic couplets consecrated to Pabuji formed an integral part of the Dingal manuscript tradition from the beginning of the 16th century. The Caran bards had immortalised his self-sacrifice on the battleground in verses like Pabuji ra duha, Pabuji rau chand and Pabuji ko yash varnan. The oral merits and virtues of the bardic tradition were held back long after the verses became an essential ingredient of the manuscript tradition of the locale.

During the pre-Independence scenario, poets in Rajasthani literature had resurrected the Dingal virkavya to vent out and publicise their anti-British sentiments. Thus, Mahakavi Moraji Ashiya tremendously lauds Pabuji’s unselfishness in Pabu Prakash (1932), a Dingal poem emoting incandescent patriotic pathos. After Independence, the Rajput ideals of virkavya testified to well suit to conveying a nationalist love for the nascent nation. The heart-rending unselfishness of Rajput warriors on the battlefield (referring to these heroic warriors as tyagi in Rajasthani idiom), for example, were smoothly translated into a yearning to give one’s life to the motherland. Poets had also eulogised medieval Rajput gallants and the intimidating freedom fighters in literature in the Rajasthani dialect, utilising Dingal versifications and bardic idiom.

Rajput Tyagi is equally an element of modern, regional definitions of Rajasthani literary identity. Oral narratives also serve as a basis of inspiration for Rajasthani prose writers like Vijay Dan Detha (1927). Vijay Dan Detha is graded amongst Rajasthani pragatishil and pragativad or progressive prose writers, who convey a modern political, often ‘reformist awareness’ through their compositions. The interrelated evolvement of written and oral narratives in Rajasthani literature is worth bearing in mind, when researchers tend to draw a new literary map of the subcontinent. And this perhaps can only be grasped and assimilated when one looks deep within the framework of the history of Rajasthani literature and its gradual development that has moved towards glittering maturity from the Rajputana era to present day patronages.

Major literature of Rajasthani developed in Rajasthani are classified into three styles which are as follows:-