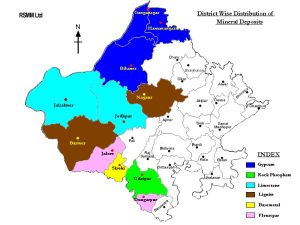 Rajasthan enjoys a virtual monopoly in the production of minerals like wollastonite, lead, zinc, calcite, gypsum, rock phosphate, silver, marble, sandstone and serpentine (green marble). There are approximately 3,403 mining leases for major minerals and 11,861 minor leases and 18,249 quarry licenses in the State.

Mining sector in Rajasthan is another pre-eminent sector next to Agriculture. There are about 42 major and 28 minor minerals found in the region. This sector provides employment to about two million mine workers throughout the state.

A total of 118.88 million tonnes of Gold ore resources were estimated in the State including 105.81 million tonnes resources of Bhukhia-Jagpura-Delwarabelt (Banswara) with 0.50gm/t cut-off grade. Gold was also proved along with Copper in Dhani-Basri area of Dausa district, Khera-Mundiawas area of Alwar district and Dokan area of Sikar district. Beside above, gold is also extracted as by product in Khetri Copper-Belt (district Jhunjhunu).

In the State copper deposits are located in the districts of Jhunhunu, Sikar, Sirohi, Udaipur, Bhilwara, Ajmer, Alwar, Bharatpur, Chittorgarh, Rajsamand and Dungarpur. With resources of 809.09 million tonnes, the State possesses substantial share of 54% of the total resources of country. The State is the second leading producer of copper concentrate contributing 41% of the nation’s output.

Large deposits of hydrocarbons have been found in Western Rajasthan and an estimated reserve of 1000 million tonnes of crude oil equivalents in Barmer. In the Jaisalmer basin region in Manohar Tiba, Tanot, Dandewala and Shahgarh 25-30 billion cubic metre natural gas reserves have been discovered. The Bikaner-Nagaur Basin also has rich heavy oil reserves.

Rajasthan is the second largest mineral producing state in India and houses about 90% of the total mineral reserves of the country.

It shares 24% of the aggregate national production of non-metallic minerals.

In India, Rajasthan is the greatest producer of non-ferric metals such as copper and zinc and accounts for 40% of the country’s copper production and 100% of zinc production. The state also accounts for 85% of lead production, 94% of gypsum, 76% of silver ore, 68% of feldspar, 84% of asbestos and 12% mica.

Thus the mineral and mining sector of Rajasthan is a very important revenue earner for the state. From this sector Rajasthan earns (as mineral royalty) an annual income of more than US$ 100 Million.

Hindustan Zinc Limited manages the large zinc mines at Dariba. Markana near Jodhpur is the site where white marble is mined. It is said that Markana marble was used in the making of the Taj Mahal.

Rajasthan State Mines and Minerals Limited (RSMML) is one of the significant Government undertakings of Rajasthan that is involved in the mining and marketing of non metallic minerals such as Limestone, Rock Phosphate, Lignite and Gypsum.

Rajasthan State Mines & Minerals Limited is one of the premier public sector enterprises of Government of Rajasthan, primarily engaged in mining and marketing of industrial minerals in the State. The prime objective of the company is to achieve cost effective technological innovations in the mining of minerals and to diversify into mineral-based downstream projects.It is primarily engaged in Mining and Marketing of High Grade Rock phosphate, Lignite, Limestone & Gypsum (Non-Metallic minerals) through its mines located at various locations at Rajasthan.