Revolt of 1857 of Rajasthan 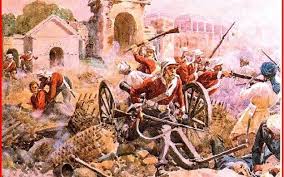 During the 1857 several Rajputs of Rajasthan were against the British Government. They were not satisfied with the rule of the Britishers, and the seeds of revolution started to emerge against the government. Common public also joined them. In many areas of Rajasthan, there was a flame of revolt in which the following names are notable.

This place was named for British officer Sir David Ochterlony, after Mughal Emperor Shah Alam II awarded him with the title of Nasir-ud-Daula (“Defender of the State”). The city is renowned for the cantonment area where several officers and army personnel were posted.

After the news of the incident of Nasirabad, on 3 June 1857 Neemuch’s rebels killed many Britishers. Consequently, britishers also planned to take revenge. They took control of Neemuch on June 7. Later the rebels started moving towards other areas of Rajasthan.

Some people were angry with the rule of King Takhat Singh and one day the soldiers  revolted agains him. He was accompanied by the anti-British Kushal Singh of Auwa.

To face Kushal Singh, Jodhpur’s army came with Lieutenant Heathkot but Kushal Singh defeated them. Later the British army tried to  invade the fort of Auwa, but they also had to face the defeat but Briggedior Homs wanted to take revenge for that defeat, so he attacked Auwa. Now Kushal left the fort and went to Salumbar. A few days later, the British took control over Auwa and spread terror there.

The emperors of Mewar were angry with the Britishers and the Maharana. There were mutual conflicts among them. Maharana ordered the feudalists of Mewar to help the Britishers. At the same time Rawat Kesari Singh of Salumbar warned Maharana of Udaipur that if his customary rights were not accepted in eight days, then he would make their opponents as  the ruler of Mewar. Rawat Kesari Singh of Salumbar gave shelter to Thakur Kushal Singh of Auwa. At the same time, the Tantia Tope travelled towards Rajputana. In 1859 Man Singh of Narwar cheated him and arrested him. Although the feudalists did not rebel directly to the British government but giving shelter to the rebels, they played an important role in this revolution.

British officer Major Burton told the Maharaja of Kota that two- four anti british opponent officers should be handed over to the British Government. But when the Maharaja expressed his inability to do this work, the British accused the Maharaja that he supported the rebels. As soon as the news came, the soldiers killed Major Burton. The rebels surrounded the king’s palace, and then the king sought the help of the ruler of Karauli. The ruler of Karauli collaborated and pushed the rebels behind the castle. At the same time, General H.G.Roberts along with the army reached the banks of the river Chambal. Rebels fled from Kota after facing him.

Many of Alwar’s leaders participated in this revolt. In Jaipur, Usman Khan and Sadullah Khan revolted. The soldiers rebelled in Tonk and invited Neemuch’s rebels to come to Tonk. They trapped Tonk’s Nawab and collected the dues from him. Similarly, Bikaner’s ruler had assured to Nana Sahab for assistance and sent 10000

cavalry soldiers to help Tatia tope. Although most of the rulers of Rajasthan remained loyal to the British during the entire rebellion, yet due to the pressure of the rebels, they had to support the insurgents sometimes.

In this unique revolution-sacrifice, the sons of the princess also offered their peace. Like other centers of the country in Rajasthan, freedom fighters started from the military camps. At that time, the British had made six military cantonments in Rajputana. The most important camp was Nasirabad. Other cantonments were – Neemuch, Beawar, Devli (Tonk), Erinpura (Jodhpur) and Khairwada (100 km away from Udaipur). With the help of these cantonments, the British had occupied almost all the kings of Rajputana. Except of the two-four kingdoms, all the dynasties had made a treaty with the Britishers. Indian soldiers were adequate in these cantonments and the message of blood lotus and roti had come to them.

The main reasons for the failure of the revolt in Rajasthan were:

(1) Indigenous rulers were short-sighted, they were devotees of the British, so they did not support rebels.

(2) There was no definite leader of the rebels; in addition they lacked unity and organization.

(3) The rebels were not as skilled as the British in battle.

After the coup, there was a change in the traditional social structure of Rajasthan. Modern education was disseminated after the suppression of  revolt and the English rules were executed in all the states, due to which the importance of Brahmins was reduced. This revolt created a new consciousness and awakening in the public. Thus the results of the rebellion were of great importance.

According to Shri Nathuram Kharagawat, “The general public also participated directly or indirectly in this enmity.”