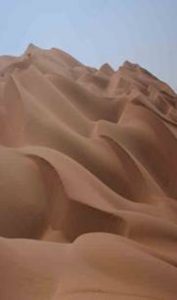 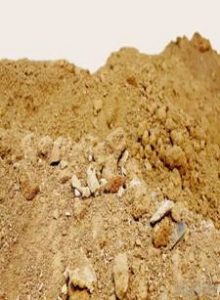 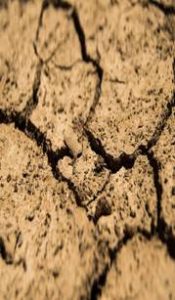 The Aravallis divide Rajasthan state into eastern and western Rajasthan. The soil improves in fertility from west and northwest towards east and northeast. In many parts of the state the soils are saline or alkaline. The soils of the State have been divided into the 7 groups on the basis of their occurrence, chief characteristics and suitability for cultivation. These soil types are:

The largest area in Rajasthan is occupied by desert soil, which covers the area west of the Aravallis up to the Pakistan border. The entire tract is ill watered and unproductive and characterized with sand dunes, hillocks and rock outcrops. The soils contain about 90 to 95 per cent sand and about 5 to 7 per cent clay. This windblown sand is partly derived from the surface rocks and partly from sand blown in from the coastal regions. This soil has high soluble salt percentage and has high pH value; the percentage of calcium carbonate is high with very low organic content. The annual rainfall of this area is less than 10 centimeters. In the case of most of the aeolian sand, the CaO content varies from 1.0 to 1.5 per cent. The CaO content in the soil is less in the sand dunes of the stabilized sandy areas at Jodhpur and at some parts of Jaipur. The soil has the presence of high nitrogen content in the form of nitrates. The phosphates and nitrates together make the desert sands fertile for agricultural crops and plants at places where water supply is regular.

This group of soil occurs in the districts of Barmer, Jalor, Jodhpur, Sirohi, Pali, Nagaur, Sikar and Jhunjhunu and covers an area of about 36,400 sq km. The fertility of this soil increases towards the east and northeast. The soil is saline and alkaline and has a high pH value. The pH of the soils and sands ranges between 7.2 and 9.2 and they are calcareous in nature. There is a presence of nitrogen in the form of nitrates which enhance the soil fertility. The soil in Pali district (Sumerpur) shows much variation. The hilly areas in the south have heterogeneous distribution of soils. Towards the north uniform and heavier soils are present. In this area various soil classes like coarse light soils, soils of the rocky areas, dark medium heavy soils, yellowish-brown medium soils and brown medium soils are present.

The western part of the districts of Udaipur, Bhilwara and Ajmer has this soil type. Due to the higher degree of hydration of ferric oxide the soil has acquired yellow color. Silty-loams to silty-clay loams are common in the region. The pH ranges from 5.5 to 8.5. The carbonate, salt content and humus content in the soils are poor. Nitrogen contents vary from 0.006 to 0.016 per cent and organic carbon contents vary from 0.057 to 0.126 per cent. The surface texture of soils at Pisangan in Ajmer district varies from sandy to sandy loam. Sometimes ferruginous concentrations are also found. The surface colour of the soil varies from light yellowish, through brown yellowish-brown to dark brown. In this area the soil has been classified in to following types – Sandy Soil, Shallow Soil and Dark Medium heavy Soil. 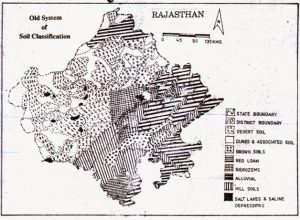 The red soil which had been formed from ancient crystalline and metamorphic rocks occupies the central and southern part of Udaipur district and the entire Dungarpur district. As compared to the black soils, red soil has a smaller content of lime, potash, iron oxide, and phosphorus. In different areas the red soil greatly differs in depth and fertility, the characteristics of lighter texture, porous and friable structure and it is invariably free from ‘kankar’ nodules. On an average this soil is poorer in nitrogen, phosphorus and humus.

This soil with neutral to alkaline pH is found in the eastern parts of the districts of Udaipur, Chittorgarh, Dungarpur, Banswara and Bhilwara.

Soil of this type is black and deep which is most commonly found in the districts of Kota, Bundi, and Jhalawar in the southeastern part of the State. The internal drainage is fairly good due to the presence of vertical cracks of varying sizes. In most of the above soils the presence of organic carbon and nitrogen are low to medium.

Alluvial soil occupies Alwar, Bharatpur, Jaipur and Sawai Madhopur and the central part of Ganganagar district, all lying on the northeastern part of the state. The soil is deficient in lime, phosphoric acid and humus. It varies from clayey to sandy loam in texture. The top soil contains ‘kankar’ which lie either on sands or sandy clays. A wide variety of crops including wheat, rice, cotton and tobacco are grown in this soil.