Telecommunications, also known as telecom, is the exchange of information over significant distances by electronic means and refers to all types of voice, data and video transmission. This is a broad term that includes a wide range of information transmitting technologies such as telephones (wired and wireless), microwave communications, fiber optics, satellites, radio and television broadcasting, the internet and telegraphs.

A complete, single telecommunications circuit consists of two stations, each equipped with a transmitter and a receiver. The transmitter and receiver at any station may be combined into a single device called a transceiver. The medium of signal transmission can be via electrical wire or cable (also known as “copper”), optical fiber, electromagnetic fields or light. The free space transmission and reception of data by means of electromagnetic fields is called wireless communications.

Data is transmitted in a telecommunications circuit by means of an electrical signal called the carrier or the carrier wave. In order for a carrier to convey information, some form of modulation is required. The mode of modulation can be broadly categorized as either analog or digital.

In analog modulation, some aspect of the carrier is varied in a continuous fashion. The oldest form of analog modulation is amplitude modulation (AM), which is still used in radio broadcasting at some frequencies. Digital modulation actually predates analog modulation; the earliest form was Morse code. Modern telecommunications use IPs (internet protocols) to carry data across underlying physical transmissions.

Role of telecommunications and socio-economic development

A modem network contributes to economic growth in four ways20 :

A sophisticated low cost telecommunications infrastructure makes information flow efficiently to and from more remote areas and is a factor when information- intensive corporations relocate. The same argument is extended by Boyle when he contends that the quality of telecommunications and mail services are the factors most often mentioned by the decision makers in case of corporate head quarters location or relocation.

Diversification of Economic Base

Most economists agree that diversity is the key to growth and stability. The less dependent a local economy is on one particular industry, the more likely it is to withstand cyclical downturns. Enhanced telecommunications services supported by a sophisticated network will allow small businesses/entrepreneurs to compete with large corporations that often have installed sophisticated private networks. 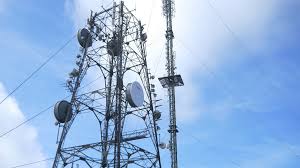 Enhancement of quality of life / delivery of vital social services

In many large cities, rush hour grid lock and poorly maintained roadways are all too familiar. In response, some government have implemented commuter and fuel taxes to discourage heavy use of public roads. Others have offered telecommuting as a solution, without a modem telecom network, however, telecommuting is impossible.