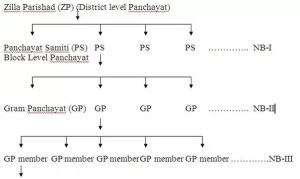 Andhra Pradesh has a long history of Panchayati Raj governance dating as far back as 1959. The Panchayati Raj System came into being in the State as a result of the report of the study team headed by Balawant Rai G. Mehta. Basing on the Balawant Rai G Mehta Committee Report, the State had adopted a three-tier Panchayati Raj structure, consisting of Gram Panchayati at bottom-tier, Panchayat Samithi at middle-tier and Zilla Parishad at top-tier. As such, Andhra Pradesh Panchayat Samities and Zilla Parishads Act, 1959 was passed and by the end of 1959, these statutory elected institutions had been established in all the districts.

The Constitution (73rd Amendment) Act, 1992 has been passed by the parliament with a view mainly to strengthen and revitalize the Panchayati Raj bodies so that they can sub serve the needs of the teeming millions that live in rural areas. Prior to the Constitution Amendment, the Government has appointed an Expert committee on Panchayati Raj bodies headed by Sri. B.P. Vittal, I.A.S. to examine and submit a report on the reorganization of the Panchayati Raj set up and also on the re – organization of revenue set up below the district level.

The final tier of the Panchayat Raj system is the district council (Zilla Parishad) composed of members elected from Zilla Parishad Territorial Constituencies (which are congruent to the mandal area). The ZP elects a president indirectly from amongst its members. Members of the Zilla Praja Parishad include – a member elected from territorial constituency, which is obviously a Mandal; a member of the legislative assembly of the State representing constituency, which forms part or whole of the district concerned; a member of the counsil of the State, who is a registered voter in the district; and two members each belonging to minorities and co-opted by the elected members of the Zilla Parishad.

Above the GP is the Mandal Parishad (sub-district committee) comprising the area of around 20 GPs. The residents of Mandal Parishad Territorial Constituencies (MPTC roughly corresponding to the Gram) elect members to a Mandal Parishad (MP). The MP members in turn elect a Mandal Parishad President (MPP) from amongst themselves. In contrast to GP elections, political party competition is allowed at the MP level. In every Mandal head quarter, a Primary Health Centre, Veterinary Hospital, High School, Junior College, Police Station, Library and Market Yard be established, to provide all facilities to the people in one place.

The Gram Panchayats in Andhra Pradesh stand at the base of the three tier structure of local governance with the Zilla Parishad at the district level and the Mandal Parishad at the intermediate level. Andhra Pradesh comprises 23 districts including one urban district, namely, Hyderabad, covering 1091 mandals. Along with 22 Zilla Parishads, 1095 Mandal Parishads, there are 21, 895 Gram Panchayats in Andhra Pradesh covering a population of 5,63,11,788 (2011 Census).

According to the Andhra Pradesh Panchayati Raj Act, 1994, every Gram Panchayat consists of two wings known as ‘Gram Sabha’ and Panchayat. The Gram Panchayat shall give due consideration to the suggestions, if any, of the Gram Sabha. Gram Sabha consists of all persons whose names are included in the electoral rolls. The Gram Sabhas met atleast twice a year to consider the annual statement of accounts and audit, the report of the administration for the previous year, the programme of works for the ahead, and the proposals for fresh taxation or for enhancement of existing taxes. The Sarpanch (President), or in his absence, the Up-Sarpanch (Vice-President) of the Gram Panchayat has to preside over the meeting.