Education has been accepted as one major agency of socialization, and teachers and educational institutions as socializing agents. In describing education as an instrument of social change, three things are important: the agents of change, the content of change, and the social background of those who are sought to be changed, i.e. students. Educational institutions under the control of different cultural groups reflect the values of those groups which support and control education. In this situation, teachers Impart specific values, aspirations and to the children.

Social reformers, who were educated emphasized values like removal of caste restrictions, equality of women, doing away with social evil social customs and practices, voice in the governance of the country, establishing democratic institutions and so on. They, thus, wanted to teach liberal philosophy through education for changing society. In other words they regarded education as a flame or light of knowledge which dispelled the darkness of ignorance. The use of education for spreading the values of modernization came to be emphasized from the 1960s and 1970s onwards. Highly productive economies, distributive justice, people‟s participation in decision-making bodies, adoption of scientific technology in industry, agriculture and other occupations and professions were accepted as goals for modernizing the Indian society. And these goals were to be achieved through liberal education. Thus, modernization was not accepted as a philosophy or a movement based on rational values system but as a process that was to be confined only to economic field but was to be achieved in social, political, cultural and religious fields too. Education was sought to be utilized as channel for the spread of modernity. 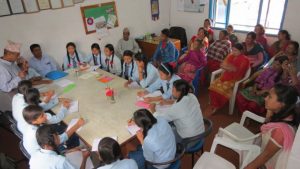 The National Policy on Education, 1986 also laid emphasis on education for attaining women‟s equality which will foster the development of new values. The strategies proposed are: encouraging educational institutions to take up active programmes to further women‟s development removal of women‟s illiteracy, removing obstacles inhibiting their access to elementary education, and pursuing policy of non-discrimination to eliminate sex stereotyping in vocational, technical and professional courses.

Education of SCs, STs. And OBCs

Education is directly related to the development of an individual and the community. It is the most important single factor for economic development as well as social emancipation. For the weaker sections of society, education has a special significance because for a number of centuries, their illiteracy and social backwardness have been used for their harassment, humiliation and economic exploitation.

Education shapes our present actions, our future plans and our past history which also develops in the future . Education is a very crucial to guide anyone to reach their goals through any success with an effort along , and the chance is very high. Example if you compare a person with masters to a person with only a high school diploma salary is totally different and there is huge gap amount between it. Educations helps you to better understand the world and with that being said education plays big role in human development and indeed it is a great to resource us.

Now a days education is very important ,without education the life of a person is just useless .He cannot do any work ,moreover today we cannot easily get a job if we are not educated. It teaches us the basic principles of life without it a person is useless. Education is perfection.
Higher education institutions themselves play a key role in equipping young people with the workforce skills needed by business. But these needs change quickly and often learning institutions are slow to respond. In this regard, stronger links between universities, businesses, trade unions and other stakeholders can help reshape course offerings to stay closely in line with evolving demands for specific skills. Co-operation can also bring other benefits favouring the investment environment, such as fostering an environment conducive to innovation and the quick diffusion of new knowledge.