1. Increase in the Direct Foreign Investment:

The policy of liberalisation has resulted in a tremendous increase in the direct foreign investment in the industrial and infrastructural sector (roads and electricity).

2. Enhancement in the Growth of GDP: There is a significant growth in the Gross Domestic Product (GDP). Prior to the liberalisation, the growth rate of GDP was around 4 per cent which rose to around 10 per cent in 2006-07.

3. Reduction in Industrial Recession: The industrial sector of India was passing through a period of recession prior to the policy of liberalisation. The foreign and private investment has checked the recession trend. This happened because of the massive investment in modernisation, expansion, and setting up of many new projects. Industries like automobiles, auto-components, coal-mining, consumer electronics, chemicals, food-processing, metal, petrochemicals, software, sport-goods, and textiles have undergone a growth rate of about 25 per cent. In addition to these, other industries, like crude-oil, construction, fertilisers, and power generation have shown an increase of about 15 per cent. 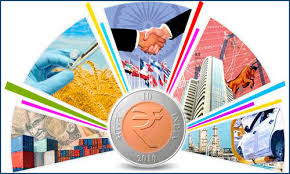 4. Employment: The heavy investments in industries and infrastructure by the Indian and foreign investors have generated great employment opportunities for the professionals, and skilled and unskilled workers.

6. Rise in Export: There is a phenomenal increase in export after liberalisation. Simultaneously India is importing raw materials, machinery, and finished products. Despite heavy imports, there has been a tangible improvement in the balance of payment.

7-Increase in Regional Disparities:The policy of liberalisation and New Industrial Policy (1991) could not reduce the regional inequalities in economic development. In fact, investments by the Indians and foreign investors have been made in the states of Andhra Pradesh, Gujarat, Haryana, Karnataka, Maharashtra, Rajasthan, Tamil Nadu, and West Bengal. The states like Bihar, Himachal Pradesh, Jammu and Kashmir, Kerala, Meghalaya, Mizoram, Nagaland, Orissa, Tripura, Uttar Pradesh, and Uttarakhand are lagging behind. This has accentuated the regional imbalance and has lead to north south devide. The maximum investment so far has been done in Maharashtra, Gujarat, Andhra Pradesh, West Bengal, and Tamil Nadu. This uneven industrial development has resulted into many socioeconomic and political problems. The Naxal Movement, ULFA, and political turmoil in Jammu and Kashmir may be partly explained as being caused due to the less industrial and economic development of the regions.
8. Damage to Cottage and Small Scale Industries:Liberalisation in a country like India has adversely affected the traditional cottage and small scale industries which are unable to compete with the large-scale industries established by the multinationals. The cottage and small scale industries need protection in the form of subsidies, technology, technical access, funds, and network to export their products, Indian traditional workers such as silk workers of bihar are threatened by the imported synthetic silk.

9.Sophisticated Technology: The latest technology, being sophisticated, replaces labour and thus results in unemployment. This may be counter productive and detrimental to our industrial structure.

10. Comparatively Little Direct Investment: The foreign investors are more inclined to portfolio investment rather than direct investment. The former may be withdrawn at will at the slightest of hurdles giving a jolt to the economy of the country  and it may create instability to Indian economy.

11. Investment in Selected Industries: Most of the foreign investment comes to white-goods and not to wage-good sector. Hence, it may be fruitful in improving the high priority sector and bringing in the latest technology. This will be counter productive. India is blessed with demographic dividend and the selective investment has failed to harness it.

12. Economic and Political Freedoms are at Stake: The over-enthusiasm of liberalisation to attract more investors and foreign exchange might lead to gradual handling over of the whole economy to the multinationals. This will affect adversely our economic and political freedom.

13. Inflation: Since the new industrial policy and liberalisations, the rate of inflation is continuously increasing. A section of the society is becoming more rich and adopting the lifestyle of consumerism. As opposed to this, the absolute number below the poverty line is also increasing. The gulf between the rich and the poor may be the cause of numerous social problems resulting in social tension.

Privatization in generic terms refers to the process of transfer of ownership, can be of both permanent or long term lease in nature, of a once upon a time state-owned or public owned property to individuals or groups that intend to utilize it for private benefits and run the entity with the aim of profit maximization.
ADVANTAGES OF PRIVATIZATION
Privatization indeed is beneficial for the growth and sustainability of the state-owned enterprises.
• State owned enterprises usually are outdone by the private enterprises competitively. When compared the latter show better results in terms of revenues and efficiency and productivity. Hence, privatization can provide the necessary impetus to the underperforming PSUs .
• Privatization brings about radical structural changes providing momentum in the competitive sectors .
• Privatization leads to adoption of the global best practices along with management and motivation of the best human talent to foster sustainable competitive advantage and improvised management of resources.
• Privatization has a positive impact on the financial health of the sector which was previously state dominated by way of reducing the deficits and debts .
• The net transfer to the State owned Enterprises is lowered through privatization .
• Helps in escalating the performance benchmarks of the industry in general .
• Can initially have an undesirable impact on the employees but gradually in the long term, shall prove beneficial for the growth and prosperity of the employees .
• Privatized enterprises provide better and prompt services to the customers and help in improving the overall infrastructure of the country.

DISADVANTAGES OF PRIVATIZATION
Privatization in spite of the numerous benefits it provides to the state owned enterprises, there is the other side to it as well. Here are the prominent disadvantages of privatization:
• Private sector focuses more on profit maximization and less on social objectives unlike public sector that initiates socially viable adjustments in case of emergencies and criticalities .
• There is lack of transparency in private sector and stakeholders do not get the complete information about the functionality of the enterprise .
• Privatization has provided the unnecessary support to the corruption and illegitimate ways of accomplishments of licenses and business deals
ADVANTAGES AND DISADVANTAGES OF PRIVATISATION IN INDIA

Definition of Globalization :- Its a process(not an outcome) characterized by increasing global Interconnections by gradual removal of barriers to trade and investment between nation and higher economic efficiency through competitiveness.

Various economic, political, social and cultural effects of globalization are as follows:-

1- Liberalization- relaxation of restrictions, reduction in role of state in economic activities,decline in role of govt in key industries, social and infrastructural sector.

2- Privatization- Public offering of shares and private sale of shares, entry of private sector in public sector and sale of govt enterprises.

9- Trade related intellectual property rights(TRIPS)- product based patent rather than process based.