In a bid to boost tourism in the city, the Andhra Pradesh government is all set to build a first-of-its-kind water aerodrome upstream of Prakasam barrage in the city.

Pakistan successfully flight tested the air-launched nuclear-capable cruise missile Ra’ad-II. The test aimed to boost the military’s deterrence capability on land and at sea. The Ra’ad-II missile is an attempt to match India’s BrahMos cruise missile.

The range of Ra’ad-II missile is 600 km. This range can enhance air delivered strategic standoff capability on land and at sea.

This missile will be attached to Mirage aircraft or F-16 fighter jets of the Pakistan Air Force.

In January 2020, Pakistan successfully conducted a training launch of surface-to-surface ballistic missile Ghaznavi. The missile was capable of delivering multiple types of warheads up to a range of 290 km.

The International Co-operation Review Group (ICRG) of the Financial Action Task Force (FATF) announced that Pakistan will be retained on the “Grey List”. Pakistan failed to completely implement the 27-point action plan to check terror financing. The announcement was made during the five-day FATF Plenary session which is held in Paris.

Pakistan was evaluated by ICRG for the steps taken by the former on the implementation of its plan of action to curb terror funding.

President Ashraf Ghani won Afghanistan’s presidential election. He has been elected for t he second term. The election results were announced by the Independent Election Commission (IEC) five months after the voting took place amid the threat of violence and concerns over electoral fraud.
Ghani won 50.64% of the vote on 28 September 2019. He defeated Chief Executive Abdullah Abdullah who secured 39.52% of votes. The results were scheduled to be announced on 18 October 2019. But the announcement got delayed due to some technical issues, allegations of fraud and protests from candidates.

Soil Health Card Day to be observed on 19 February

A report released by National Productivity Council (NPC) in 2017 stated that the SHC scheme has promoted sustainable farming and led to a decrease in the use of chemical fertilizer applications in the range of 8-10%. It showed an overall increase in the yield of crops to the tune of 5-6% was reported due to the application of fertilizer and micronutrients according to the recommendations available in the Soil Health Cards.

India will stop the import of thermal coal from FY 2023-24 says, Pralhad Joshi

State of India’s Birds 2020 reported that 79% of the bird species are on a decline in the last five years. The report was released at the 13th Conference of Parties (COP-13) of the Convention on the Conservation of Migratory Species of Wild Animals (CMS) which is hosted in India.

The report stated a dramatic rise in Peafowl/Peacock population calls for an assessment of crop damage caused by the bird.
♦ The report was based on data provided by citizen scientists and enthusiasts.
♦ The Indian bird species was compiled from the 10 million observations provided by birdwatchers on an online database known as eBird.
♦ It determined the population trends for only 261 species. Out of the total species, 52% of species showed a decline and 43% of bird species had a stable population.
♦ Vultures and bustards showed the biggest decline.

The move by IGIA is in line with Prime Minister Narendra Modi’s vision to abolish all single-use plastic from India by 2022.
♦ DIAL has committed to preserving the environment.
♦ It has significantly reduced the plastic waste generation with the use of eco-friendly sustainable alternatives.

India gets its first Greco-Roman gold medal after 27 years

Sunil Kumar won India’s first Greco-Roman gold medal in Asian Wrestling Championships in 27 years on 18 February. He defeated Azat Salidinov of Kyrgyzstan under the 87kg category at the summit. He scored 5-0 in the event to claim the title. The previous gold was won by Pappu Yadav in 1993 for India under the 48 kg in the Greco-Roman category.

Also, Arjun Halakurki won bronze at the championship under the 55 Kg category. He defeated Donghyeok Won of Korea to claim the medal. 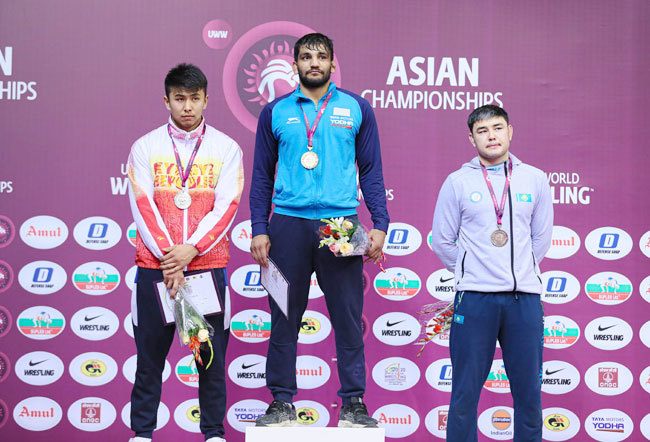