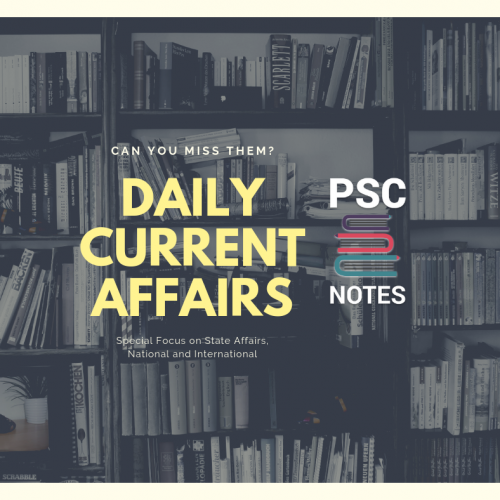 The program aims to prioritize female personal hygiene and encourage a healthy dialogue of information on Menstruation.

Swechha is formed to ensure affordable access to health and menstrual hygiene in adolescent girls and women.

Good quality sanitary napkins will be provided to the female students by the state government at government institutions for free.

Ten sanitary napkins will be given each month to about 10 lakh adolescent girls studying from 7th-12th grades in government schools and intermediate colleges across the state at a financial expense of INR 32 crores.

A total of 120 napkins annually is allotted to each female student. Even during summer vacations, the students are provided with their share before they leave school.

The 13th International G-20 Conference was on 6 October.

♦ India is identifying the vacuum areas in international policy coordination within the backdrop of assuming the G20 presidency in 2023.

♦ The G20 presidency will provide an incredible platform for India to insist on its vision regarding the longer term, reflecting sustainability, innovation, inclusiveness and justice.

♦ The Themes set by India for G20 presidency 2023 will help the emerging economies to work together in a constructive role across the global policy arena.

♦ It also emphasizes the importance of multilateral cooperation and reaching out to the global community beyond the G20.

In the first phase, the States of Rajasthan, Punjab, Gujarat and Haryana are being taken up for the heli-borne survey.

Survey was started from Jodhpur in Rajasthan on October 5.

This technology has been developed by CSIR-NGRI Hyderabad.

The state-of-the-art technology, Heli Survey Technology, will be used to map the groundwater sources in arid regions.

Survey will help in utilizing groundwater for drinking purposes.

Heli-borne geophysical mapping technique will provide high-resolution 3D image for sub-surface up to a depth of 500 meters below the ground level.

Aim of the project

This project has been developed with the aim of mapping potential groundwater sources and its management in providing safe drinking water to people in the water scarce arid regions of India.

The first shipment of Mihidana sweets was GI tagged and sent from West Bengal to Bahrain.

♦ Mihidana, a sweet dish that originated from Bardhaman, West Bengal, was given the Geographical Index Tag (GI).

♦ The shipment was exported to Aljazira Group and provided for tasting purposes to the consumers at Aljazira superstores in Bahrain.

♦ More of the shipment will be exported during the Diwali festival.

♦ The GI tag is a crucial sign used on products with a selected geographical origin and reputation.

♦ It denotes the authenticity of not only the merchandise but the tactic during which it had been produced.

♦ The GI tag is supposed to guard the truly unique traditions of communities against appropriating large industries and thus allow these regions economic prosperity by manufacturing, producing, and marketing their lore.

♦ The MITRA parks will be set up costing Rs 4445 crores in five years.

♦ The park was announced as a part of Union Budget 2021-22, which will help India stand at par with Global textile giants.

♦ These MITRA Parks were established in greenfield or brownfield sites in different states.

♦ This will also help with the employment opportunities with 7 lakh direct jobs and 14 lakh indirect jobs.

♦ Till now, states like Tamil Nadu, Andhra Pradesh, Assam, Gujarat, Rajasthan, and 5 more have shown interest in the establishment.