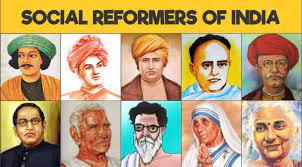 In the evolution of modem India the reform movements of the nineteenth century have made very significant contribution. They stood for the democratization of society, removal of superstition and abhorent customs, spread of enlightenment and the development of a rational and modem outlook. Among the Muslims the Aligarh and Ahmadiya movements were the torch bearers of these ideas. Ahmadiya movement which took a definite shape in 1890 due to the inspiration of Mirza Ghulam Ahmad of Qadian, opposed jihad, advocated fraternal relations among the people and championed Western liberal education. The Aligarh movement tried to create a new social ethos among the Muslims by opposing polygamy and by advocating widow marriage. It stood for a liberal interpretation of the Quran and propagation of Western education.

The reform movements within the Hindu community attacked a number of social and religious evils. Polytheism and idolatry which negated the development of individuality or supernaturalism and the authority of religious leaders which induced the habit of conformity were subjected to strong criticism by these movements. The opposition to caste was not only on moral and ethical principles but also because it fostered social division. Anti-casteism existed only at a theoretical and limited level in early Brahmo movement, but movements like the Arya Samaj. Prarthana Samaj and Rama Krishna Mission became uncompromising I critics of the caste system more trenchant criticism of the caste system was made by I movements which emerged among the lower castes.

The urge to improve the condition of women was not purely humanitarian, it was part of the quest to bring about the progress of society. Keshub Chandra Sen had voiced this concern: ‘ “no country on earth ever made sufficient progress in civilization whose females were sunk in ignorance”. An attempt to change the then prevalent values of the society is evident in all these movements. In one way or the other, the attempt was to transform the hegemonic values of a feudal society and to introduce values characteristic of a bourgeois order.