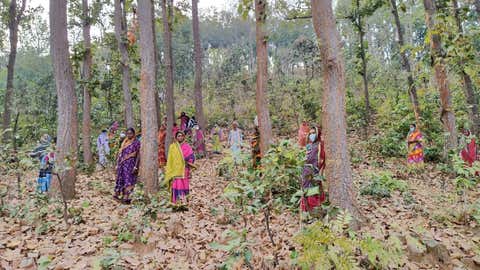 . In the early 1850’s we come across some tribal movements in Orissa. There were popular movements among the Khonds of Ghumsar and Baud (1854-56) and the Savaras of Parliakhemedi. These popular movements were attributed to Chakra Bisoi who, since 1837, had resisted all attempts to arrest him. The specific problem among the Khonds centred around the determination of the colonial administration to stop the human sacrifices associated with the ‘meriah’ sacrifice. What is worth noting is that the new pressures and uncertainties forced the Khonds to appease their gods for good harvests of turmeric, but the colonial administration tried to stop this practice. Some colonial officials hoped that the improvement of material conditions of the Khonds would serve to liquidate the ‘meriah’ sacrifice.

Very little is known about Chakra Bisoi and the early tribal movements. Bisoi took up the cause of a young boy whom the Khonds ‘believed’ was the Raja of Ghumsar. ‘We get references to Khonds ‘attacking’ some villages in Ghumsar (1854) and how they kefused to betray Chakra. In a desperate attempt to crush the rebellion the police arrested a mendicant by mistake, thinking that he was Chakra Bisoi. It seems some landholders and ruling chiefs (i.e. of Patana and Kalahandi) who felt threatened by colonial rule maintained links with Chakra.

In 1856-57 there was the Savara rebellion in Parliakhemedi led by one Radhakrishna Dandasena. The colonial administration saw links between this movement and Chakra Bisoi, who could never be arrested. Nothing was heard of him after October 1856. He seems to have faded into popular memory after the Savara rising was crushed with Dandasena’s hanging in 1857. However, there are doubts whether Chakra Bisoi was behind all these popular movements, or whether his name came to be associated as a symbol of popular tribal protest.