Status of Education in Uttrakhand and Various central and state Education schemes:-The Rashtriya Madhyamik Shiksha Abhiyan (RMSA) scheme initiated in 2009, demonstrates the government’s ambition for a secondary education system that can support India’s growth and development.
RMSA aims to increase the enrolment rate to 90% at secondary and 75% at higher secondary stage, by providing a secondary school within reasonable distance of every home. It also aims to improve the quality of secondary education by making all secondary schools conform to prescribed norms, removing gender, socio-economic and disability barriers, and providing universal access to secondary level education by 2017.

Literacy is the first and foremost factor contributing directly to human resource development of the country and shaping the good quality of life. With that direction, the State of Uttarakhand stands 14th position in the country, which is mainly due to various interventions adopted by the State Government to steer the progress in the field of education. The State of Uttarakhand has pledged to focus its attention for addressing the “quality” aspect of education. As per 2001 census, Uttarakhand literacy rate is 71.62 percent as against the national average of 64.84 percent. However, male and female literacy rates are 83.28 percent and 59.63 percent as against the national average of 75.26 percent and 53.67 percent respectively. As per 2001 census, the literacy rate of Schedule Castes in Uttarakhand is male 77.26%, female 48.74% as against the national average of male 66.64%, female 41.90%.

Uttarakhand is comprised of 13 districts, which include 95 development blocks, 1001 clusters and 7227 Village Education Committees (VECs). There are 21 Educationally Backward Blocks (EBB) in the State as per 2001 census. The School Development Management Committees (SDMCs) have been reconstituted under the chairmanship of Headmaster of the school and a teacher as member secretary. Members of Panchayat Samiti representatives, SC and ST representatives and female members of the village are represented on the SDMCs. 5.9 Uttarakhand is implementing both Centrally Sponsored Scheme and State Sector Schemes to impart basic education in the State. Three major Centrally Sponsored Schemes, SSA, Mid Day Meal Scheme and National Literacy Mission Programme are being proposed to continue in the state. Besides, an externally aid project of District Primary Education Programme (DPEP)- III has come to an end in March, 2006. Programmes running under DPEP, like BRC, CRC ECCE centers and teacher training will be continued in Non- Plan as State liability.

The Government of Uttarakhand has been striving for expansion and access of educational facilities to entire area of the state through SSA since the formation of new State. The schemes of UEE and efforts made under SSA Programme have further improved the position of the State. Obviously, mass community mobilization for implementation and execution of various components of SSA in terms of opening of Primary Schools, alternative schooling facilities, construction of school buildings, appointment of additional teachers, enrolment, retention divers teachers training distribution of text books, up gradation of teaching learning equipments and community participation has resulted in significant progress of literacy levels in the State. Due to the success of SSA, an unprecedented demand has created in the state. 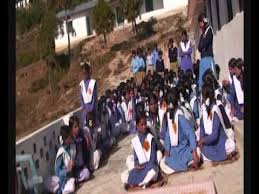 Vital statistics pertaining to key indicators of elementary education is summarized here. There were 27.42 percentage point dropout cases at primary level as on 30th September, 2005. Due to special efforts made by the State Government, these children were brought to the fold of primary education, further efforts are on to cover the remaining children in the near future. In addition, there are 35230 children enrolled in 1279 EGS Centres spread all over the state as on March, 2008. There are about 15896 children reported to be Out of School as per the HHS. The State has registered significant improvement in transition rates in the primary stage. i.e., from Primary to Upper Primary is 99.15% in 2006- 07. But, as per flash statistics the transition rate from primary to upper primary in 2006-07 is 81.08%.

The efforts of the State Government towards enrolling children appear to be encouraging, keeping in view the large geographical area and socio-cultural and economic context. Out of 25,029 habitations in the state, 22682 (90.62%) habitations are covered by primary schools and 1433 habitations (6%) by EGS centers. However, there are 913 or 4% habitations without access of any kind at primary level which is mainly due to lack of permanent strategy to cover these habitations which are not eligible for regular school or for EGS center. Various efforts are being made to bring un-enrolled girls in the age group from 6-14 years in remedial teaching, vocational skill development, strengthen Meena Manch and mainstreaming them. These efforts are really commendable. Still serious and concerted efforts are needed to bring the hardest to reach children into the fold of education for which proper training of personnel and their motivation is desired besides involvement of NonGovernment Organizations (NGOs).

The major constraint in serving the un served habitations seems to be the geographical diversities coupled with social taboos and non-availability of teachers / para teachers for such areas. The migratory population and child labourers are also the constraints in the way of universalization of elementary education.

The State Government has to take newer initiatives in community participation, removal of social barriers and eradication of child labour practices by involving NGOs and social activists. The support of existing teachers at the grassroots level and CRC and BRC in this direction may also prove to be helpful. As reported by the state Government, it has undertaken several measures to reduce gender gap in the age group 6-14 years in Uttarakhand. The existing share of girls in primary schools :48.84. Out of 13 districts, there are nine Special Focus Districts in the State. Such as Almora, Bageswar, Champawat, Chamoli, Haridwar, Nainital, Pitoragarh, Udham Singh Nagar and Uttarkasi.

Uttarakhand has undertaken several initiatives to promote education of girls.

Significant ones are listed below:

• Girls, toilets are built on a priority basis.

• Special coaching classes/remedial classes are run in schools for girls with support from SDMCs. Remedial teaching is provided to weak students as well as volunteers engaged for the purpose.

• For out of schoolgirls especially Bridge Courses are being organized.

• SDMCs in every school decide final incentives to be given to girls which include free textbooks, workbooks, uniform, stationary and other items as per local needs.

The National Programme of Education for Girls at Elementary Level (NPEGEL) is operational in all 13 districts in 40 blocks with 412 clusters. 4117 primary schools and 942 upper primary schools are attached with these 412 model cluster schools . To monitor the programme State, district and block level committees have been formed.

Keeping in view the socio-cultural milieu of the State, there is need for taking steps to enhance gender sensitization within the education system and also the community at large. Greater community participation and stronger school community linkages would be helpful. Possibility of opening of upper primary schools exclusively for girls may also be examined. Teachers may be trained in adopting classroom processes favourable to girls.

Out of total child population in the age group 6-11 years, the ST and SC population constitute 3.88 % and 25.43 % respectively. The enrolment rate of ST and SC children has been reported to be 99.61 % and 99.43 % respectively. Although access of SC and ST children may not be a challenge, but their retention and learning are certainly the challenges, the State needs to address these issues.

It is yet to be seen how well the ST and SC children do in primary education. All SC and ST children are provided with free textbooks. The quality aspects would need to be taken care of now. Enhancing Learning Achievement and Quality in Elementary Education.

Quality of elementary education generally refers to the product or outcome dimension, which depends on the nature of inputs and processes undertaken. Infrastructure support and availability of teachers and teaching-learning material (TLM) and its use, teacher training, pedagogical practices in classrooms to involve children and pupil evaluation practices contribute towards learning achievement of children – an important indicator of quality at the elementary stage.

The State Government has performed reasonably well in terms of creating and improving adequate infrastructure facilities. Community support and convergence with relief work in infrastructure development is noteworthy. Preference has been given to the following provisions in schools
• School Building with the concept of pedagogy
• Drinking water
• Sanitation
• Ramps
• Play Elements
• Child Friendly Class Room
The Mission found that in some of the schools the rooms have been constructed in spite of availability of additional rooms for use. Therefore, there is a need for better infrastructure planning and use.

Pupil-Teacher ratio (PTR) has been brought down to 1:27 at the primary stage. About 1319 new teachers have been recruited and posted during 2007-08.

TLM grant has been provided to 44,438 teachers(Primary/Upper Primary) in the State. Also teachers have been given training in preparation of local specific and contextual TLMs. The mission witnessed the availability of TLM in every school that was visited. However, use of TLM grant was not found to be a common practice. Follow up of training would therefore be required to increase the use of TLM, making teaching – learning lively and joyful Enhancing Learning Achievement and Quality of Elementary Education. Enrolment, Retention and Dropout.

With a view to enhancing enrolment, attendance and retention and simultaneously improving nutritional levels among children, the National Programme of Nutritional Support to Primary Education (NSPE) was launched as a Centrally Sponsored Scheme ( CSS) on 15th August 1995 in the Country, to cover not only children in Classes I- V of Government, Government aided and Local body schools, but also children studying in EGS and AIE Centers. Central Assistance under the scheme consisted of free supply of food grains @100 grams per child per school day and subsidy for transportation of food grains up to a maximum of Rs.50 per quintal. In that direction, the Government of Uttarakhand providing Cooked food under Mid Day Meal in all Government Primary Schools of the State benefiting about 8 lakh students.

Under the Programme, Central Share is directly provided to districts by the Government of India directly. Total literacy campaign has been successfully implemented in all 13 districts of the state. At present, Post Literacy Programme(PLP) and Continuing Education programme are in operation in these districts at various levels. Obviously, Gender gap of 24% in male and female literacy is still an issue to be addressed in the State. Programme for residual illiterates is proposed for focused interventions in cities and farthest habitation to bridge the gender gap to attain total literacy target.

Free Text Books for All Children:

With a view to encourage enrolment at the elementary level for Universalisation of Elementary Education (UEE) all boys and girls belonging to SC and ST categories studying in Parishadiya Primary, Upper Primary Government and aided schools are being provided free text books under Sarva Shiksha Abhiyan. State Government has decided to further extended the benefit of this scheme to rest of boys and girls of general categories enrolled in Classes I-VIII.

The Government of Uttarakhand has started the scheme of Shiksha Mitra to meet out the shortage of teachers of Primary level in remote and far-flung areas of the State. Under the scheme Shiksha Mitras are placed against the vacancies of Primary teachers with a honorarium of Rs.4000 per month for a period of ten months.

Besides, there are two major special plan schemes under basic education are in operation in the State. Such as,

a) Maintenance of Primary Schools Under SCSP There are 3724 habitations with more than 50% scheduled cast population and minimum 300 population in Uttarakhand. Out of these 3002 habitations have a primary school and 1481 have an upper primary school within 1KM reach. It is estimated that about 1345 schools are required immediate repairing, boundary wall, a kitchen shed for Mid day meal by Social Welfare Department under Schedule Cast Sub Plan (SCSP).

b) Maintenance of Elementary Schools Under TSP There are 351 habitations was more than 50% Schedule Tribe Population, which qualify the norm of minimum 300 population. There are 344 primary and 169 upper primary schools in these habitations. As per available estimate by State, 154 schools are required immediate repairing, boundary wall, a kitchen shed for Mid Day Meal.