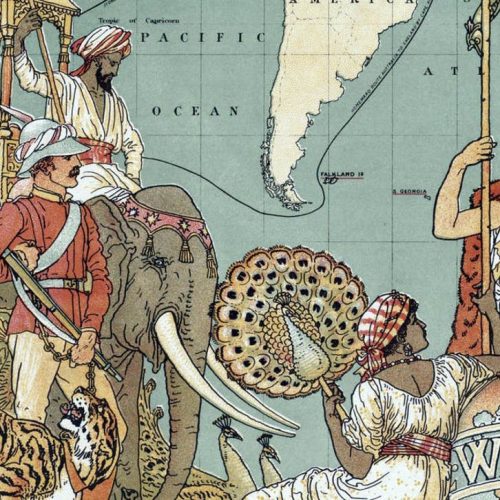 The idea of ‘Russian Peril’, was propagated by Lord Palmerston, British Foreign Secretary, in the mid-nineteenth century and the term first time mentioned by William Bentinck, the Indian Governor-General was believed to reflect a real danger. Checked  I by the British in Mediterranean Sea, the Russians rapidly advanced towards the north- western frontier of Afghanistan. The British in India had not reached the natural  frontier, as both Punjab and Sindh were &dependent states. Persia though weak, aspired to revive the glory it had achieved during the period of Nadir Shah. Mirza I Mohammad succkeded to the throne of Persia after his grandfather’s death in 1834. He was favourably inclined towards Russia. It appeared as though the Russians were determined to control the whole of Near and Middle East (now known as West Asia) and this was seen as posing a threat to Afghanistan.

The British were anxious to protect Afghanistan, the emporium of their trade, and the only entrance to Central Asia from their side. A stage was thus set for the Central Asian duel between the two expanding empires. Persia’s siege of Herat and the unhappiness of Dost Mohammad (the Amir of Kabul) with the British policy makers combined with the over-anxiety of the British Indian administration lecfto the First Afghan War (1838-42) which proved to be a great disaster for the British. One of its significant consequences was the annexation of Sindh (1843) and Punjab (1849) which made the frontier of British Indian empire co-terminus with that of Afghanistan.

The disaster in the First Afghan War led to the return of Dost Mohammad on the throne of Kabul. To the distinct advantage of England, he maintained absolute neutrality when England was fighting against Russia in the Crimean War (1854-56) or was facing in India the revolt of 1857. Soon after the Crimean War, the Russians advanced swiftly in Central Asia. Making the Russian intention clear Prince Gortchadoff wrote in his memorandum of 1864 that in approaching Afghanistan Russia was influenced by the same imperious law that had led the British armies across the plains of Hindustan and Punjab till they reached the mountains.