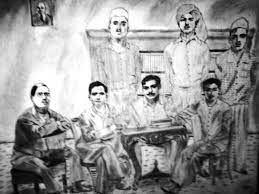 The spontaneous upsurge of the non-cooperation movement released the great force of India’s youth that were determined to wrest freedom. The youth of the country had responded eagerly to the call of Gandhi and had participated in the non-cooperation movement. The sudden withdrawal of the movement was a blow to their aspirations. The secret samitis of the first phase of the revolutionary movement began to be revived in Punjab and in Bengal.

The Anushilan Samiti in Bengal was associated with Subhas Bose and the Yugantar Samiti with the JM Sengupta group. There was considerable amount of political rivalry between these two groups. Some smaller revolutionary groups began to be formed at about this time for example the one under Surya Sen of Chittagong that developed along much more radical lines. The most striking revolutionary action of the time was the murder of an Englishman, Day, by Gopinath Saha in January 1924. Saha had planned to kill Tegarb the police Commissioner of Calcutta and killed Day by mistake. This incident resulted in the arrest of many nationalists.

Another centre of revolutionary ferment was northern India where Sachin Sanyal and Jogesh Chatterji and others formed the Hindustan Republican Association in the United Provinces and started raising funds through dacoities. The most renowned of which was the Kakori train robbery in August 1925 that resulted in the arrest of several members of the organization. This organization also established links with a group of young men in the Punjab under the dynamic and brilliant student leader Bhagat Singh. The Punjab group was deeply influenced by socialist ideology. Hence the organization was renamed Hindustan Socialist Republican Association (HSRA). The aim of the revolutionaries was complete independence and they had a vision of how the State should be after the achievement of the same. They envisaged a mass struggle of the people and for this purpose they tried to mobilise students workers and peasants.