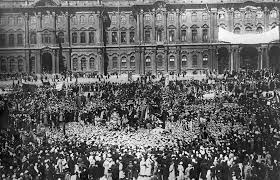 On 16 October 1917, Lenin persuaded the Petrograd Soviet and the Bolshevik Party to agree to a socialist seizure of power. A Military Revolutionary Committee was appointed by the Soviet under Leon Trotskii to organise the seizure. The date of the event was kept a secret.

The uprising began on 24 October. Sensing trouble, Prime Minister Kerenskii had left the city to summon troops. At dawn, military men loyal to the government seized the buildings of two Bolshevik newspapers. Pro-government troops were sent to take over telephone and telegraph offices and protect the Winter Palace. In a swift response, the Military Revolutionary Committee ordered its supporters to seize government offices and arrest ministers. Late in the day, the ship Aurora shelled the Winter Palace. Other vessels sailed down the Neva and took over various military points. By nightfall, the city was under the committee’s control and the ministers had surrendered. At a meeting of the All Russian Congress of Soviets in Petrograd, the majority approved the Bolshevik action. Uprisings took place in other cities. There was heavy fighting – especially in Moscow – but by December, the Bolsheviks controlled the Moscow-Petrograd area.