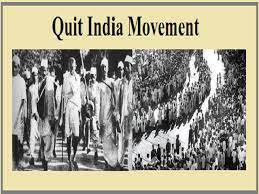 . In August 1942, Gandhiji started the ‘Quit India Movement’ and decided to launch a mass civil disobedience movement ‘Do or Die’ call to force the British to leave India. The movement was followed, nonetheless, by large-scale violence directed at railway stations, telegraph offices, government buildings, and other emblems and institutions of colonial rule. There were widespread acts of sabotage, and the government held Gandhi responsible for these acts of violence, suggesting that they were a deliberate act of Congress policy. However, all the prominent leaders were arrested, the Congress was banned and the police and army were brought out to suppress the movement.

Meanwhile, Netaji Subhash Chandra Bose, who stealthily ran away from the British detention in Calcutta, reached foreign lands and organized the Indian National Army (INA) to overthrow the British from India.  The Second World War broke out in September of 1939 and without consulting the Indian leaders, India was declared a warring state (on behalf of the British) by the Governor General. Subhash Chandra Bose, with the help of Japan, preceded fighting the British forces and not only freed Andaman and Nicobar Islands from the Britishers but also entered the north-eastern border of India. But in 1945 Japan was defeated and Netaji proceeded from Japan through an aeroplane to a place of safety but met with an accident and it was given out that he died in that air-crash itself.