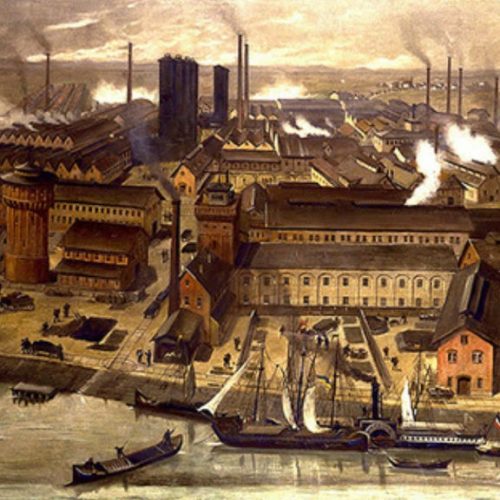 . France witnessed the growth of capitalism in fifteenth century. However, in comparison to England she was rather a late starter. Especially France was an agricultural country till the beginning of the nineteenth century. Gradually capitalism was developed in France with the extension of guilds, the rise of factory system with the use of machinery steam power and improvement in transport and communication facilities.

The individuals got freedom from the control of the guild. Before the French Revolution Turgot abolished the guild system in 1774-76. Ultimately on 16 February 1791 the monopoly of the guilds was terminated. There after the individual gained lot of industrial freedom. During Napoleonic era the industrial freedom suffered a setback. He imposed a number of restrictions to regulate the price and quality of goods. However after 1815 most of the trades were again revived.

Another factor which greatly contributed to the growth of capitalism in France was the confiscation of the feudal and the church property by the revolutionaries. The acceptance of the landed property held by private individual the introduction of the national system of weights and measures by the state promoted commerce and trade. All these things directly and indirectly helped capitalism.

The most important role in the development of capitalism in France was played by the banking system and the principle of free trade. The banking system in France was originated with the institution of Bank of France in 1800. The bank started with privately owned capital. It worked in close cooperation with the government. Similarly, the policy of free trade adopted by France in the mid-nineteenth century also greatly helped in the growth of capitalism. In 1860 there was Cobden Treaty in between France and England for free trade. France also signed the similar agreements with Belgium, Italy, Germany, Austria, Switzerland, Sweden, and Norway.