Rise of Mahayana and Development of Art (Gandhara, Mathura and other Schools)

Mahayana Buddhism is sometimes called Northern Buddhism. It is mainly followed by monks and nuns, and is largely found throughout China, Japan, Korea, Mongolia, Nepal, Russia, Tibet, and Vietnam.

First the old form of Buddhism, known as the Hinayana Buddhism, had now become quite out-of-date. It was based on icy idealism and lacked realism. It had no emotional appeal. Its chief doctrines of self-suffering, non-violence and self-discipline were too difficult to be followed by common people. So the need of some sort of reformed religion as keenly felt by the people. 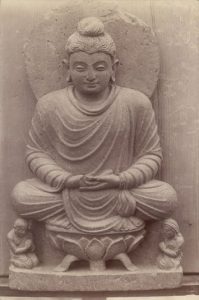 Secondly, Hinayana Buddhism sect was mean to suit the Indian nationality alone but it could not serve the purpose of Kanishka’s subjects which were composed of different nationalities. To them a religion based on a personal God, devotion and faith had a greater appeal.

Thirdly, with the fall of the Magadhan Empire, Pataliputra the seat of Buddhist orthodoxy, lost much of its importance and became only a secondary city in India. Without this decrease in the importance of Pataliputra, the rise of a new cult in Buddhism would have become very difficult.

Fourthly, a dispute over many doctrines of Buddhism had lately become so acute that it required an immediate settlement.

Keeping all these things in view Kanishka called a Buddhist council, the fourth of its kind, at Kundalvana, near Srinagar in Kashmir. It was attended by about 500 monks and scholars on the Buddhist theology. The chief among them were Vasumitra, Asvaghosa, Nagarjuna and Parshva. It is generally believed that Vasumitra was the President and Asvaghosa was the Vice-President of this Council. Two important results were achieved in this Council.

Mathura and Gandhara also strongly influenced each other. During their artistic florescence, the two regions were even united politically under the Kushans, both being capitals of the empire.

Besides religious sculptures, the Gandhara School of Art carved secular statues according to need. The finest example of this art is seen in the life-size statue of Kushana Emperor Kanishka. The King stands in royal posture with majestic dignity. His robes were typical of the Kushana era. The legacy of the Mathura art reached its culminating height during the Gupta Era which saw a puranic religious revival.