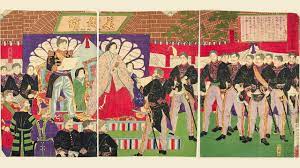 Capitalism in Japan began in the later half of the nineteenth century. This lately nine of capitalis Throw light on the development of industrial capitalism in Japan.m in Japan was due to her a strong feudalistic society. It had also commercial agreements with countries like USA, England, France, and Holland. The Japanese society was decided in the higher and lower classes. The people had freedom of protection and movement. So Japan had adequate economic progress but Japan had no autonomy in matters of tariff in the foreign trade and commerce.

However, with the coming of Emperor Meiji to the power in 1868, there was sigficant administrative changes. He undertook various steps to improve the socio-economic conditions of the Japanese. That measure paved the way for the growth of capitalism in Japan. He abolished feudalism in 1871 without causing any large scale bloodshed. He granted the freedom of profession and movement to the Japanese. The process of the development of trade and commerce started. However, Japan lacked both the capital and industrial enterprises. So, from the beginning the government stressed on the infrastructural development. The country generated foreign funds. With it Japan started railways, telegraphs and telephones, textile and glass factories etc. For these developments Japan took the help of technicians of Holland, Germany, France and England. Subsequently, various private entrepreneurs were also encouraged. In 1882 the bank of Japan was also set up. It was given the monopoly of issuing notes currency.

In the process of the growth and development of capitalism in Japan, the state had a vital role. In this regard the state had three types of role; firstly, the state played the role of an entrepreneur. It started industries. It also supervised them. The state also encouraged the private sector. Secondly, the state became a financier. It provided finance to the industries. It channelized the national resources by controlling banking, tariff and taxation system. Thirdly, the state enjoyed a capacity far in excess of the available markets. It controlled inflation and deflation.