Asaf Jahi Dynasty and seven generations of the family ruled the Deccan for 224 years upto 1948. During this period several buildings of archaeological and public importance were built. Notable among them are: Purani Haveli, Chow Mahalla Palace, Osmania University, Jubilee Hall, Assembly Building, Asifia Library, Osmania Hospital, High Court, and all the buildings in the Public Garden.

The founder of this dynasty was one Mir Kamaruddin, a noble and a courtier of the Mughal Muhammad Shah, who negotiated for a peace treaty with Nadirshah, the Iranian invader; got disgusted with the intrigues that prevailed in Delhi. He was on his way back to the Deccan, where, earlier he was a Subedar. But he had to confront Mubariz Khan, as a result of a plot by the Mughal emperor to kill the former. Mubariz Khan failed in his attempt and he was himself slain. This took place in A.D.1724, and henceforth Mir Kamaruddin, who assumed the title of Nizam-ul-Mulk, conducted himself as an independent prince. Earlier, while he was one of the Ministers of the Mughal emperor 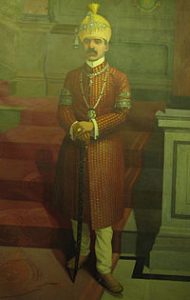 Muhammad Shah, the latter conferred on him the title of Asaf Jah. Thus begins the Asaf Jahi rule over Golconda with the capital at Aurangabad but later moved to Hyderabad, which became the capital of the Asaf Jahi dynasty.

Asaf Jah ruled wisely and established an independent state in the Deccan. He was one of the ablest statesmen. However, his death at Burhanpur on 21st May 1748 at the age of 78, was followed by a struggle for the throne. By this time, foreign powers were spreading their tentacles. Asaf Jah’s second son Nasir Jung was supported by the British whereas Muzafar Jung, grandson of Asaf Jah, was supported by the French. Nasir Jung succeeded; but after a brief rule he was slain in 1750 in an encounter with the French troops at Arcot. Thereupon, Muzafar Jung ascended the throne. In the following year he was murdered and his son Salabath Jung was put on the throne. In 1762 Salabeth Jung was dethroned by his brother Nizam Ali Khan, and confined at Bidar where he died in 1793

Nizam Ali Khan ascended the throne in 1763 and he ruled Hyderabad for almost forty years. This was one of the eventful periods in the history of India. Foremost among competitors for supremacy in the Deccan were the Marhattas and it was during this period that the famous French adventurer Monsieur Raymond was employed by Nizam Ali Khan.

Between A.D.1766 and A.D.1800, Nizam’s sovereignty had declined considerably and the British gained their authority over the Nizams by compelling the latter to sign six treaties.
In A.D.1766, the Nizam signed a treaty with the British, whereby in return for the Northern Circars, the British agreed to furnish Nizam Ali Khan with a subsidiary force as and when required and to pay Rs.9 lakhs per annum when the assistance of the troops was not required in lieu of Northern Circars to be ceded to them. In A.D.1768 he signed another treaty conferring the Northern Circars to the British and the payment by the British was reduced to Rs.7 lakhs. According to another treaty, he surrendered the Guntur circar in A.D.1788. In A.D.1779, the Nizam conspired with Hyder Ali of Mysore and the Peshwa of the Marathas to drive away the English. When they learnt about his designs, the English marched against the Nizam who had to sue for peace agreeing to the presence of an English Resident along with army, artillery and cavalry at Hyderabad

Through another treaty, the Nizam was compelled to disassociate himself from Hyder Ali. In A.D.1800 yet another treaty was signed by the Nizam with the British altering the earlier treaties to increase the strength of the English army in Hyderabad. In lieu of the cost of maintenance of the force, the Nizam had to cede to the company an area comprising the districts of Rayalaseema and Bellary (now in Karnataka). With this the Nizam lost not only the territory but also reputation and power.

The Telugu land was divided into major divisions: one that became popularly known as Telangana under the feudal rule of tha Nizam which represents approximately one third of all land and another broadly designated as Andhra, India Britain. The English cantonment, raised in the other side of Hussain Sagar, was named after Nizam3- Sikandar Jah (1803-1829 AD) and Secunderabad. The Afzal Gunj Bridge or Nayapul on the Musi River was built and set up a General Hospital under the rule (AD 1857-1869) of Nizam 5 Afzal-ud-Daula.

The modern era of the development of the twin cities began soon after the last flood of the river Musi in A.D.1908 which had shattered the life of the people living in Hyderabad. This necessitated the planned development of the city in a phased manner. Sri M.Vishweshwarayya, the great engineer of Mysore, was specially invited for this purpose and was appointed as adviser to the Nizam’s Government to suggest measures for flood control and improvement of the city. As a result of his suggestion, Osman Sagar and Himayat Sagar were constructed in A.D.1917. These two dams not only controlled the floods from river Musi, but also supplied drinking water to the city. These spots have also become recreational centres for many people in Hyderabad. Another step taken for the development of the city was the formation of the City Improvement Board in A.D.1912, which paid greater attention to the construction of roads,
markets, housing sites and shopping centres in the city.

The seventh Nizam led a very simple life, yet he was one of the richest men in the world. He donated generously to every cause in India as well as abroad irrespective of caste and religion. If it was the Muslim theological school at Deoband which received financial help, it was also the privilege of the Benaras Hindu University. His list of donations included Rabindranth Tagore’s Shantiniketan and several other institutions including hospitals, schools, for famine relief, etc. The golden temple in Amritsar also enjoyed an annual donation.

If Muhammad Quli Qutb Shah was the founder of Hyderabad City, Osman Ali Khan, the Nizam VII, can be called as the maker of modern Hyderabad, in a variety of ways.

A fascinating pretty edifice in the centre of the city is the Andhra Pradesh Legislative Assembly building, with the lawns of the Public Gardens, to form the needed premises.

The noble buildings during the Asafjahis’ period were the Chow Mahalla during Nizam V, Pancha Mahal, and the Falaknuma Palace. The Falaknuma, built by Nawab Viquar-ul-Umra, a Paigha Noble in A.D.1892 at a cost of Rs.40 lakhs, has become a land mark like Charminar.

The Nizam’s rule saw the growth of Hyderabad economically and culturally. Electricity, railways, roads and airways developed. Huge reservoirs and irrigation projects such as the Tungabhadra, and Nizamsagar were completed. The early work on Nagarjunasagar was undertaken. The Osmania University, Colleges and Schools were founded throughout the state. Nearly all the public buildings currently in such as the Osmania General Hospital, High Court, Central State Library, Assembly Hall, Jubilee Hall and other buildings in the Public Garden were built during Osman Ali Khan’s reign.

The hereditary Diwans of the Nizams, the Salar Jungs were as colourful and dazzling as their masters. The Mir Alam Tank, the Mir Alam Mandi, the Salar Jung Museum, their Devdi, the Aliya School are inalienable parts of Hyderabad.