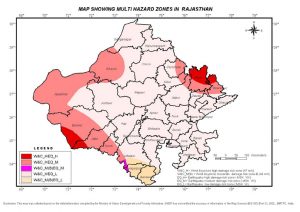 Types of Disasters and Disaster Risks in the State:-

Types of Disasters : Disasters are broadly categorized as Natural and Man-made

Natural Disasters are of several types, e.g. related to :-

Man-made Disasters can also be of different types, e.g. related to:

Disaster status in the State :-

Failure of Monsoon and recurrent drought makes the condition of the State more vulnerable. The drought is almost regular feature in the State, especially the western part, covered mostly by desert (60%) Many parts of Rajasthan fall under seismic zone II, III & IV. Some parts of Jalore, Sirohi, Barmer and Alwar districts fall under zone IV, whereas many parts of Bikaner, Jaisalmer. Barmer, Jodhpur, Pali, Sirohi,

The habitation/industrial areas of the State are quite prone to fire accidents. Disasters like hailstorm, frost and cold wave, locust attack, cyclone, cloud burst etc. also sometimes occur in some districts of the State. Sand storms and cyclones occur very frequently in the desert districts of the State. Sometimes heavy crop damage is caused due to hailstorm & frost and consequently the rural areas face the problem of security of food and fodder severely. Potential of Chemical, industrial, nuclear disasters has increased substantially, due to rapid industrialization of the State.

Recent Earthquakes in the Area

26 Jan 2001. Bhuj quake of Kutch in 2001 was felt in many parts of Rajasthan as well. Its effect was felt more severely in Jalore, Barmer and Jaisalmer. Many buildings in these districts like schools, rest houses and privately owned buildings had developed huge cracks and had been rendered unsafe. Many other buildings developed cracks making them unsafe for further use without proper retrofitting. Many of the public buildings mainly schools are still lying in dilapidated conditions.

8 November 1991. A 5.4 magnitude earthquake near Jaisalmer caused some damage in the village of Konoi and was felt as far as New Delhi.

The area where Mangala processing terminal and the well pads are located lie in a MODERATE seismic zone (Zone III) and there are no incidents of severe seismic activities till date as per the records available with the local district authorities. However all its facilities are built to withstand earth quakes of the expected intensity in Zone III category.

The major natural hazard in the region is drought brought about due to the hot arid climate and very dry sandy soils. Moderate to severe drought occurs every year. In 2009 alone, 269 villages in the Barmer Taluk were affected by drought.

Barmer region where the Cairn facilities are located are prone to frequent sandstorms which disrupt the normal functioning and operations.

Biological hazards facing Barmer comprise high temperatures (heat stroke), fires (burns), accidents and diseases. In terms of epidemics, Barmer has faced mainly small scale epidemics of swine flu, malaria and chikungunya. The main reason behind the limited spread of disease in this region is the sparse population. Thus the impact scale of the epidemics is small, generally covering not more than 50 people. The single largest epidemic in recent years was the swine flu epidemic where 35 were infected of which 9 died. The other major disease is malaria which is endemic to the region due to the large-scale usage of open water storage tanks.

Floods are rare due to poor rainfall in the region but unusually high quantum of rain can result in flash floods as seen in Kawas region of Barmer district in 2006. In August 2006, the usually drought prone Barmer district was hit by flash floods. As of August 27, 2006, 103 deaths were reported in Rajasthan due to floods. The village of Kawas was the most affected and located close to Mangala Processing Terminal. The water level as on March 6, 2007 was about 3 feet to 10 feet above ground in Kawas. People had to live in make shift camps for several months. The loss included the death of 75,194 cattle and damage to Kharif crop was worth Rs.1300 crore. In Barmer Tehsil, Aati and Undkha villages alone nearly 600 people were affected by 2006 floods. In August 2006, unprecedented floods hit the region and destroyed many buildings and infrastructure elements. It was for the first time in recorded history of 200 years that such severe flooding had taken place in this desert, normally known for its perennial droughts. Many school buildings in rural Barmer were destroyed or severely damaged, rendering them unusable and unsafe for occupation. Even after the rain stopped, the water did not drain out, because of an impermeable layer of subsurface gypsum. A layer of gypsum below the sandy surface prevented flood waters from seeping into the ground in the region, slowing down relief efforts. Gypsum is a mineral used in the building industry. Bodies of thousands of cattle were floating in the flood waters, causing a foul smell in some areas and raising concern about the spread of disease in Barmer.

The high incidence of fires is due partly to the high temperatures during summer and partly to the presence of large numbers of kutcha (thatched) houses in the villages. The percentage of temporary housing made from dried thatch is 57.8% thereby exposing a large percentage of the population to fire-related hazards. There is also a lack of proper fire safety awareness among the community members. Annually there are at least 10 – 15 villages badly affected by fire accidents in every taluk of Barmer District.

Hazards and risks can potentially emanate from riots, civil strife, pilferage and sabotage and may be taken into consideration for disaster preparedness and management. The project area is about 100 -150 km away from the Indo–Pak border and hence the chances of collateral damage during a war are high. The proximity of the border also increases the probability of terrorist attacks.

Previously, the approach to disaster management in the State was limited to undertaking response and relief activities, post disaster and providing initial assistance to the victims. Financial assistance from central government has also been sought usually for this purpose. This traditional method of providing relief was only a temporary arrangement, which was usually being adopted as a token measures. These activities were usually winded up after return of normalcy. This relief centric approach was devoid of any plan or policy for prevention and mitigation, although these are important aspects for management of any disaster.

Rajasthan Rahat Kosh has been established on 20-1-2006 for providing relief in those natural calamities, which are not covered / permissible for relief expenditure under SDRF (CRF). A budget provision of Rs.25 lacs is being made in this fund, every year. Apart from this, funds could be mobilised in this ‘Kosh’ from public contribution.