There are several references about an Andhra kingdom and a people called Andhras in the Sanskrit epics Mahabharata and Ramayana, Puranas, and Buddhist Jataka Tales. Rukmini from the Mahabharata hailed from Vidarbha, the Kingdom stretching through the Deccan Plateau, around the Vindhya ranges which includes the present day Andhra, Maharashtra, Madhya Pradesh and Karnataka regions, including the little known, now apparently submerged archipelago in the Bay of Bengal. Rama in his exile is said to have lived in the forests around the present day Bhadrachalam in Andhra Pradesh. Evidence for a flourishing kingdom in coastal Andhra Pradesh relates to the visit of Buddha to Amaravati in the Guntur district. Lord Buddha preached at Dharanikota and conducted Kalachakra ceremony, which takes the antiquity of Amaravati back to 500 BC. Taranatha, the Buddhist monk writes: “On the full moon of the month Caitra in the year following his enlightenment, at the great stupa of Dhanyakataka, the Buddha emanated the mandala of “The Glorious Lunar Mansions” (Kalachakra). The recorded history of Amaravati and nearby Dharanikota is from the 2nd century BC. Around the Mauryan age, there is historical evidence of Andhra as a political power in the southeastern Deccan. Megasthenes, who visited the Court of Chandragupta Maurya (322-297 BC), mentioned that Andhras had 30 fortified towns and an army of a million infantry, 2000 cavalry and 1000 elephants. Buddhist books reveal that Andhras established their kingdoms in the Godavari Valley at that time. Asoka referred in his 13th rock edict (232 BC) that Andhra was under his rule. 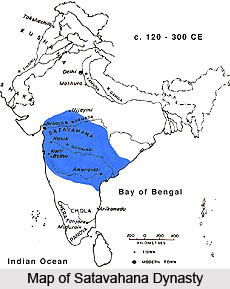 The continuous political and cultural accounts of Andhra Pradesh commences with the rise of the Satavahanas as a political power. According to Matsya Purana there were 29 rulers of this dynasty. They ruled over the Andhra desa for about 456 years from the 2nd century BC to the 2nd century AD. According to an inscription at Nasik, it was under Gautamiputra Satakarni, the 23rd Satavahavana, the kingdom included most of the southern peninsula and some southern parts of present Indian states like Maharastra, Orissa and MadhyaPradesh. The court language used by Satavahanas was Prakrit. Buddhism flourished throughout this age, and several Buddhist Stupas including Amaravati, Chaityas and Viharas were constructed during this time, although the kings followed Vedic religion. The fall of the Satavahana Empire left Andhra in political chaos. Local rulers carved out small kingdoms for themselves. From AD 180-624, Ikshvaku, Brihatpalayana, Salankayana, Vishnukundina, Vakataka, Pallava, Ananda Gotrika, Kalinga and others ruled over parts of Andhra with small kingdoms. Most important among these small dynasties was the Ikshvaku. Nagarjuna Konda was their capital and they patronized Buddhism, though they followed the Vedic ritualism. Sanskrit mostly replaced Prakrit as the language of the inscriptions. 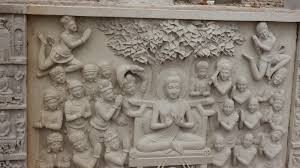 e Krishna valley choosing Vijayapuri as their capital. There were only four kings in the Ikshvaku line beginning with Chantamula, a valiant ruler who performed Agnihotra, Agnistoma, Aswamedha sacrifice, gifted lakhs of cows, ploughs, gold and brought the coastal Andhra and Telingana under his control. He was succeeded by Veerapurushadata who relinquished Hindu faith and took to Buddhism.It was probably during his period that Nagarjunakonda became a celebrated center of Buddhism to which Buddhist from all parts of India, Ceylon, China and other places have flocked. Yahuvala Santamula and Rudrapurushadata succeeded Veerapurushadata. Though Ikshvakus have barely ruled for less than a century their contribution to Buddhist sculptural art and architecture is immense.

Most of the inscriptions of the Andhra Ikshvaku period record either the construction of the Buddhist Viharas or the gifts made to them. All the donors and builders of the Viharas were the female members of the Ikshvaku royal family. Although Santamula I is reported to have performed the Vedic sacrifices, nothing is known about the religious leanings of his successors. This was the period during which Andhra became a flourishing centre of Buddhism and a place of pilgrimage for the Buddhists. The patrons were ladies from the royal household, the merchants and artisans and the people at large. The great stupas of Jaggayyapeta, Nagarjunakonda and Ramireddipalle were built, repaired or extended during their reign. Buddhist pilgrims and scholars visited the Buddhist centre at Nagarjunakonda. The attraction for this Buddhist centre can be accounted for from the sea trade which was carried on between Lanka and the Ikshvakus though the ports situated on the mouths of the Krishna and the Godavari.

The Pallava Empire was an ancient South Indian kingdom. The Pallavas, feudatories of Andhra Satavahanas, became independent after the decline of that dynasty in Amaravati. Initially they ruled southern Andhra Pradesh, also known as Palnadu, situated in the Guntur district. Later they extended their rule to Tamil regions and established their capital at Kanchipuram around the 4th century. They rose in power during the reign of Mahendravarman I (571 – 630) and Narasimhavarman I (630 – 668) and dominated the southern Telugu and northern parts of Tamil region for about six hundred years until the end of the 9th century. Pallavas are most noted for their patronage of Dravidian architecture, still seen today in Mahabalipuram. The Pallavas, who left behind magnificent sculptures and temples, established the foundations of classical Dravidian architecture. A Chinese traveller Hiuen Tsang visited Kanchipuram during Pallava rule and extolled their benign rule.

The Vishnukundinas were a dynasty that ruled over the Deccan and South India. It played an important role in the history of the Deccan during the 5th and 6th centuries. According to Edward B. Eastwick, the Maharaja of Vizianagaram descends from the Maharajas of Udaipur and is of the Sisodia branch of the Gehlot tribe. A brother of the Maharaja of Udaipur migrated to Oudh in the 5th or 6th centuries, and relatives of this line migrated into the Deccan and settled at various times in Indra-Pala-Nagara in the Nalgonda district and in Vinukonda in the Guntur district. The early rulers of the dynasty were feudatory of the Vakatakas with whom they had marital alliances as well as with the Rashtrakutas. In 529, a descendent, Madhava Varma, and four other clans gained independence and solidified their position by defeating the Salankayanas in coastal Andhra. They had different capitals such as Amaravati and Bezwada until they eventually settled into Vizianagaram. Over the centuries the other four clans served as feudatories to the Vizianagaram rulers as well as subsequent dynasties such as the Chalukyas. One of the forts later traditionally connected to Rajus is Kalidindi in Krishna district, which was under the Vishnukundin sway for a long time. In 1512, the Maharaja of Vizianagaram was conquered by the Golkonda dynasty and was made Subahdar of the Northern Circars. The title was conferred by Emperor Aurangzeb, who gave him a two-edged sword (Zulfikar), which is still used in the coat-of-arms of the family. Maharaja Vijaya Rama Gajapati Raju III, in 1845 had several honors conferred on him by the British Government. Lord Northbrook conferred the title of His Highness. His son was born 31 December 1850 and a daughter was married to His Highness Maharaj Kumar Singh, cousin and heir apparent of H.H. Maharajah of Rewah. The Rajahs of Vizianagaram obtained the title of ‘Gajapathi’ after the battle of Nandapur, in the Northern Circars in the 16th century

The chalukyas of badami

Region of Chalukyavishaya.The region comprising Mehaboobnagar, Kurnool and Cuddapah districts was included in the Hiranyarastra that was subsequently known as Chalukya Vishaya, a territory owned by the Badami. Interestingly the region of Chalukya Vishaya is studded with several groups of temples having typical Rekhanagara (curvilinear) vimanas, similar ground plans and artistic embellishments. They are situated at Satyavolu, Panyam, Kadamalakalva, in Kurnool district, Kudalisangam and Alampur in Mehboobnagar district. One of the titles of the first Pulakesi being Satyasraya; we believe that Satyavolu in Kurnool district may be one of the early capitals of the Chalukyans. The earliest member of the Chalukyan family known through inscriptions was Jayasimha, the grandfather of Pulakesi I. It is not clear how Jayasimha was related to Vishnuvardhana the legendary Chalukyan Prince who was brought up by Vishnubhatta Somayaji of Mudivemu Agrahara (in Cuddapah district) as recorded in the the legend of the mythical origin of the Chalukyas was narrated by Bilhana in his celebrated work Vikramankadeva Charitra and the same repeated in many inscriptions of the later Chalukyas, particularly the Nandampudi grant of Rajarajanarendra.

The early Chalukyas ruled Deccan for over 200 years. They were ardent Hindus in religion and built a large number of temples in their typical style of architecture as stated above the founder of the dynasty was Jayasimha who originally hailed from Chalukya Vishaya. Pulakesi 1, the son of Ranaraga started his rule independently of the Kadambas he collected a large army and captured Badami in 546 AD built a strong fort and made Badami his second capital. Later he performed an Aswamedha sacrifice and bore the title as Satyasraya. He had another title of Ranavikrama.He was succeeded by his son Kirtivarma1 in 566 AD who ruled for 30 years. He was a great warrior who conquered Anga, Vanga, Kalinga, Vattora, Magadha, Madra, Kerala, Ganga, Mushika, Pandya, Dravida, Chola, Anupa, Vaijayanti, Nala, Maurya [Konkan], Kadamba, and Kalachuri. In all the battles he fought he was ably assisted by his younger brother, Mangalesa who succeeded him in 596 due to Kirtivarma‘s son Pulakesi 11, was still in infancy.

Between 624 and 1323, a significant change came about in social, religious, linguistic and literary spheres of Andhra society. During this period the Telugu language, emerged as a literary medium subsuming the predominance of Prakrit and Sanskrit. As a result, Andhra achieved an identity and a distinction of its own. The Eastern Chalukyas were a branch of the Chalukyas of Badami. Pulakesin II conquered Vengi (near Eluru) in 624 and installed his brother Kubja Vishnuvardhana (624-641) as its ruler. His dynasty, known as the Eastern Chalukyas, ruled for nearly four centuries in all. Vishnuvardhana extended his dominions up to Srikakulam in the north and Nellore in the south. The Eastern Chalukyas occupied a prominent place in the history of Andhra Pradesh. Since the time of Gunaga Vijayaditya in 848, inscriptions show Telugu stanzas, culminating in the production of literary works in the coming centuries. Later in the 11th century, the Mahabharata was translated partly by the court poet Nannaya under the patronage of the then Eastern Chalukya ruler Rajaraja Narendra. Throughout this period and up to the 11th century, the Telugu language was written in old Telugu script. Al-Beruni (1000) referred to old Telugu script as “Andhri” in his “Kitab Al-Hind”. The emergence of the Telugu script from the old Telugu script started around the 11th century and culminated in the 19th century. After a brief period of sovereignty under Gunaga Vijayaditya, the Vengi region again came under the Rashtrakuta rule and later the Kalyani Chalukya rule from the beginning of the 10th century to the 11th century, when the Cholas managed to wrest control from the Chalukyas. However by 1118, with the defeat of the Kulottunga Chola at the hands of Vikramaditya VI of the Kalyani Chalukya dynasty and the victory of Hoysala ruler Vishnuvardhana over the Cholas at Talakad, Vengi once again came under Chalukya rule. The Kalyani Chalukya power itself went into decline after the death of Vikramaditya VI. By the end of the 12th century, their empire was split into several local kingdoms, namely the Hoysala Empire, the Kakatiya Kingdom and the Yadavas.