The 12th and the 13th centuries saw the emergence of the Kakatiya dynasty. They were at first the feudatories of the Western Chalukyas of Kalyani, ruling over a small territory near Warangal. A ruler of this dynasty, Prola II (1110–1158) extended his sway to the south and declared his independence. His successor Rudra (1158–1195) pushed the kingdom to the east up to the Godavari delta. He built Warangal Fort to serve as a second capital and faced the invasions of the Seuna Yadavas of Devagiri. The next ruler Mahadeva extended the kingdom to the coastal area. Ganapati Deva succeeded him in 1199. He was the greatest of the Kakatiyas and the first after the Satavahanas to bring almost the entire Telugu area under one unified empire. (Unlike Satavahanas, Kakatiyas are native Telugu kings who used Telugu as court language.) He put an end to the rule of the Velanati Cholas in 1210 and extended his empire till Anakapalle in the north. The most prominent ruler in this dynasty was Rani Rudrama Devi (1262–1289), one of the few queens in Indian history. An able fighter and ruler Rudramba defended the kingdom from the Cholas and the Seuna Yadavas, earning their respect. She remains one of the few female powers of the South India for all time. On the death of Rudrama, her grandson Prataparudra, who was adopted by her as son and as heir apparent on the advice of her father Ganapatideva, ascended the throne at the beginning of the year 1290. Prataparudra had to fight battles throughout his reign against either the internal rebels or the external foes. Prataparudra expanded borders towards the west till Raichur and in the south till Ongole and Nallamala Hills, whilst introducing many administrative reforms, some of which were also later adopted in the Vijayanagar empire. The Kakatiya dynasty faced Muslim onslaughts from 1310 and came under the control of the Delhi Sultanate in 1323. A brief period of 50 years of independence was enjoyed under Musunuri Nayaks who rebelled and liberated Telugu land from the rule of Delhi. Although short lived the Musunuri Nayaks rule was a watershed in the history of south India. Hakka (Harihara) and Bukka, who were previously treasury officers in the court of Prataparudra drew inspiration from them and consolidated Hindu opposition to Muslim invaders. Eventually, after the fall of the Kakatiyas in 1370, the Vijayanagara Empire, considered the last great Hindu and Telugu empire, swept across the Telugu land and the present day Karnataka (1336–1450). Small parts of Telugu region were under Reddys of Kondavidu and Rajahmundry and Recherla Velamas of Telangana, who were content to be vassals of Muslim kingdoms.

The first of the Reddy clans came into prominence during the Kakatiya period. During this time the Reddys carved out for themselves feudal principalities. After the death of Pratapa Rudra II and the subsequent fall of the Kakatiya empire, the Reddy chiefs became independent and this led to the emergence of the Reddy kingdom. The 19th century writer Edgar Thurston in his book, Castes and Tribes of Southern India stated that Reddys were the village chiefs and listed them under the section Kapu. The village chiefs were given the title “Reddy”. The Reddy dynasty (1325–1448) ruled some parts of the coastal Andhra Pradesh for over a hundred years. Reddys became independent after the death of Pratapa Rudra II and the subsequent fall of the Kakatiya Dynasty. Thus emerged the Reddy Kingdom. Prolaya Vema Reddy was the first king of the Reddy dynasty. The capital of the kingdom was Addanki which was moved to Kondavidu and subsequently to Rajahmundry. His reign was characterized by restoration of peace, patronage of arts and literature, and all round development. Errana, the translator of Ramayana, lived during this period. Origins of Reddys: The Rashtrakutas and Reddys seem to share a similar origin, from the great “Rattas” or “Rathis” or “Rashtrikas” who ruled the Deccan from ancient times. The “Rathis” ruled over small principalities in the Deccan plateau before 200 BCE, before the Satavahanas and Mauryas. The word “Rathi” or “Ratti” is found under various forms such as Reddi, Ratta, Rashtrakuta, Rahtor, Rathaur. They left coins in northern Andhra Pradesh, Kurnool district, and near Pune. Coins were found in the levels between the megalithic to Satavahana periods in excavations. The usage of the word Reddy specifically was first seen in the inscriptions made during the Renati Chola period (7th century CE). Reddys are believed to be an offshoot of the Rashtrakuta dynasty. After the decline of the Rashtrakuta dynasty, the ruling clan broke off and settled in North and South India. Rashtrakutas were a Rajput clan. The settlers in the north are called Rathods/Rathores, and ruled Marwar in western Rajasthan, while the southern settlers were called Reddys.

empire Vijayanagara Empire, one of the greatest empires in the southern India, was founded by Harihara (Hakka) and Bukka, who either served as Treasury officers in the administration of Kakatiya dynasty or as Hoysala commanders. When Warangal fell in 1323, the two brothers were captured, taken to Delhi and converted to Islam. They were sent to the Deccan as 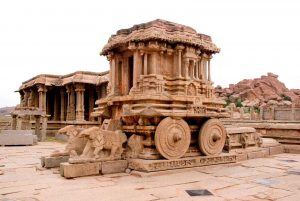 governors of Kampili by the Delhi Sultanate with the hope that they would be able to deal with the local revolt and invasions by neighbouring Hindu kings. Their first campaign was against the neighbouring Hoysala emperor, Veera Ballala III of Dwarasamudra. Later, the brothers reconverted to Hinduism under the influence of the sage Vidyaranya and proclaimed their independence from the Delhi Sultanate. However, this theory of conversion to Islam, wars against the Hoysalas and their reconversion to Hinduism has been rejected by other historians who claim the founders were Kannadigas and were stationed in the Tungabhadra region by Hoysala Veera Ballala III to fight the Muslim invasion. Harihara I (reigned 1336–56) then established his new capital, Vijayanagar, in an easily defensible position south of the Tungabhadra River, where it came to symbolize the emerging medieval political culture of South India. The Vijayanagara empire reached its peak under Emperor Krishnadevaraya in the early part of 16th century. Telugu literature reached new heights during this time. Fine Vijayanagar monuments were built across South India including Lepakshi, Tirupathi and Sri Kalahasti in Andhra Pradesh. The largest and most famous ensemble of Vijayanagara monuments are at Hampi in modern Karnataka.

In 1323 the Delhi Sultan Ghiaz-ud-din Tughlaq sent a large army under Ulugh Khan to conquer the Telugu country and lay siege to Warangal. In 1347, an independent Muslim state, the Bahmani Sultanate, was established in south India by Ala-ud-Din Bahman Shah as a revolt against the Delhi Sultanate. By the end of the 15th century, the Bahmani rule was plagued with faction fights and there came into existence the five Shahi sultanates. Of these, it was the Qutb Shahi dynasty that played a significant and notable role in the history of Telugu land. The Qutb Shahi dynasty held sway over the Andhra country for

about two hundred years from the early part of the 16th century to the end of the 17th century. Sultan Quli Qutb Shah, the founder of the dynasty, served the Bahmanis faithfully and was appointed governor of Telangana in 1496. He declared independence after the death of his patron king, Mahmud Shah, in 1518. Aurangazeb, the Mughal emperor, in 1687 invaded Golconda and annexed it to his empire. He appointed a Nizam (governor) and thus for about a period of 35 years this region was ruled by Mughal Nizams. Aurangazeb died in 1707 and the administrative machinery of the Mughal imperial regime began to crumble and it gradually lost control over the provinces. It enabled two foreign mercantile companies to consolidate themselves as political powers capable of subsequently playing decisive roles in shaping the destiny of the nation. They were the East India Company of England and the Compagnie des Indes Orientales of France.